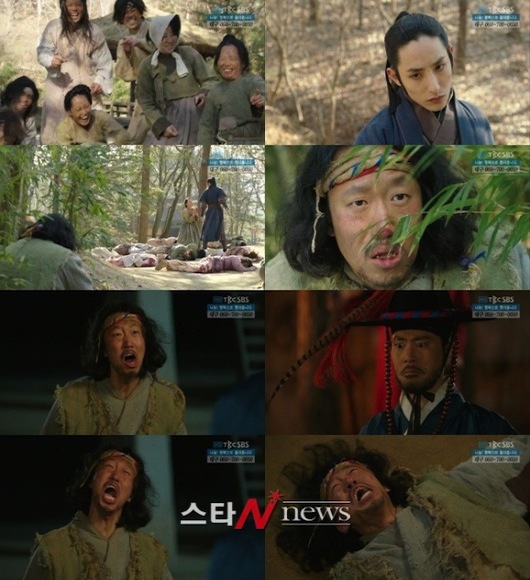 On the December 15th episode of SBS "Deep-rooted Tree", Kim Kyung-jin appeared as a beggar and suffered some injustices because of Sejong Lee Do (Han Suk-kyu) creating Hangeul.

Kim Kyung-jin needed to go to the bathroom while singing with his beggar friends and when he came back, he saw Yoon-pyeong (Lee Soo-hyuk) killing his friends and ran to the government office.

However, they didn't let him in and he dropped to the ground wailing and singing the Hangeul song, "What? Beggars can't even talk about what's unfair? All my friends and brothers are dead. All of them. This isn't fair".

What happened to him contradicted the very reason why Sejong wanted to make Hangeul.

Previously, Sejong debated with Jeong Ki-joon (Yoon Je-moon) about issuing Hangeul and mentioned 'Jaro' saying, "The Great Sambong said no one advised the king not to become a librarian, an Excellency or a humble man when there was no government. The existence of the government stifles the freedom of speech and the people have no way to advise to the politicians, so how is the present time a reign of peace?"

Meanwhile, Sejong suggested to Lee Sin-jeok (Ahn Suk-hwan) to make the Milbon a clique and become their leader, while Sim Jong-soo (Han Sang-jin) used a weapon to suggest Jeong Ki-joon hand over the position of leader.

"[Spoiler] "Deep-rooted Tree" Kim Kyung-jin cries in sorrow"
by HanCinema is licensed under a Creative Commons Attribution-Share Alike 3.0 Unported License.
Based on a work from this source