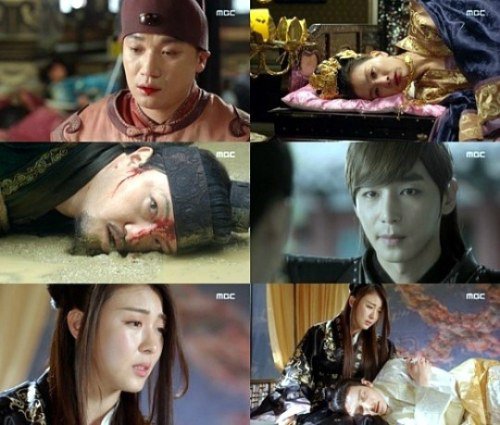 Everyone besides Ha Ji-won died.

On the final episode of the MBC drama "Empress ki" which ended on the 29th, Ji Chang-wook (Ta Hwan) struggled to protect Ha Ji-won (Ki Seung-nyang) when he found out the truth about Golta (Jo Jae-yun). The Queen Mother (Kim Seo-hyung), Yeom Byeong-soo (Jung Woong-in) and Tal Tal (Jin Yi-han) were brutally killed.

Ta Hwan couldn't avoid death as well. Ki Seung-nyang asked him, "Don't you want to ride the fields with me? I want to go north with you". He said, "I would do anything you ask for. Let's do it".

Ta Hwan confessed his love her Ki Seung-nyang and she told him that she loved him. Then he stopped breathing.

Netizens say, "The final episode is so good", "Jin Yi-han, Ha Ji-won and Ji Chang-wook are so great" and more.

"[Spoiler] "Empress ki" Ji Chang-wook and Jin Yi-han die, Ha Ji-won lives"
by HanCinema is licensed under a Creative Commons Attribution-Share Alike 3.0 Unported License.
Based on a work from this source