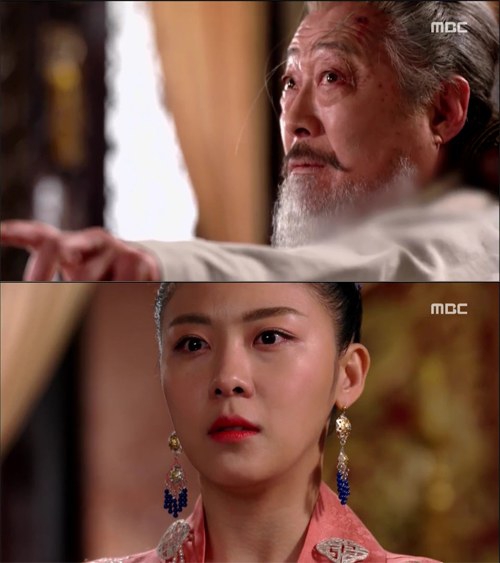 Ta Hwan (Ji Chang-wook) ordered Yeon Cheol's death as he had committed treason. Yeon Cheol said, "I would like to advise you before I go. You should keep away from the girl who you adore so much".

"The Yuan Dynasty would be in ruins because of her. If Tanasili was to take her place, she would fill in the spots with Koryo people".

He then told the Queen Mother (Kim Seo-hyung), "What makes you think Ki Seung-nyang won't be after you now that she's done with me?" Then to Baek Ahn (Kim Young-ho), he said, "Putting a girl like that in the lead, blind for authority. You will have to get rid of her with your own hands".

Finally he said, "I am not afraid of death but I am afraid this mighty empire will be under that girl's hands".

Ki Seung-nyang said, "Yeon Cheol, I will tell you something good. According to your foresight, I will make my son the emperor and become the empress of this country. I am going to fill those around me with Koryo people and I will rule them all myself".

Meanwhile, Tanasili (Baek Jin-hee) heard about the death of her father and broke down in sorrowful tears.

"[Spoiler] "Empress ki" Jeon Gook-hwan's last moments"
by HanCinema is licensed under a Creative Commons Attribution-Share Alike 3.0 Unported License.
Based on a work from this source