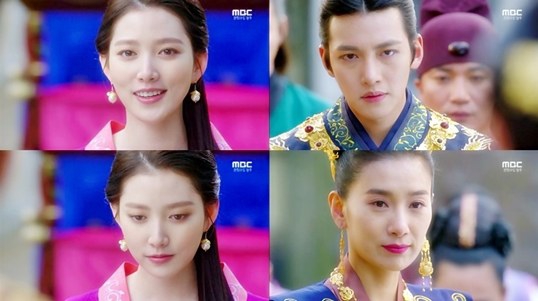 She made a short but impressive appearance in the MBC drama "Empress Qi" on the 17th of March.

Ta Hwan and Baek Ahn's (Kim Young-ho) niece Bayan met for the first time. Bayan paid her respects to Ta Hwan and the Queen Mother (Kim Seo-hyung) was satisfied with the elegant and graceful candidate.

However, Ta Hwan who was thinking of choosing Ki Seung-nyang (Ha Ji-won) as his empress, said to Bayan coldly, "I am never choosing you as my empress so return to where you came from". Bayan then said, "You will choose me. I am happy that you are happy with me".

Her short but first appearance in the drama had a great effect. She was different from Tanasili (Baek Jin-hee).

"[Spoiler] "Empress Qi" Lim Ju-eun's existence "
by HanCinema is licensed under a Creative Commons Attribution-Share Alike 3.0 Unported License.
Based on a work from this source