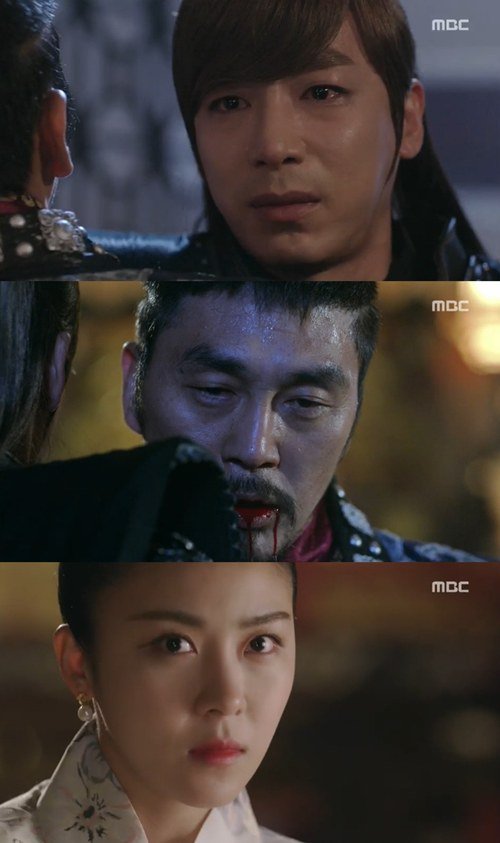 On the forty-eighth episode of the MBC drama "Empress Qi" on the 21st, Tal-tal (Jin Yi-han) betrayed his uncle Baek Ahn (Kim Young-ho) and stood by Ki Seung-nyang's (Ha Ji-won) side.

Baek Ahn and Ki Seung-nyang asked Tal-tal to discretely exchange means of killing each other. Tal-tal decided to hold hands with Ki Seung-nyang and not Baek Ahn who was overcome with greed for authority.

Ki Seung-nyang saw that Baek Ahn had come to her and said, "You're going to be loyal to me now? People don't change. Do you think I won't know that you have only stepped away with a knife in your hand? You're not someone who ignores his principles. Am I wrong?" Baek Ahn took out his sword and said, "This is my answer". Later, Baek Ahn's warriors appeared but they weren't his. They were Ki Seung-nyang's. She ordered them to get rid of him and they engaged in a fight.

Tal-tal heard Baek Ahn calling him and went over there in tears. Then he took out his sword and struck Baek Ahn's stomach. Baek Ahn asked why he was betraying him and Tal-tal said, "Do you remember? You told me to kill you, if you turned blind with greed for power".

Baek Ahn said, "Is that how I am right now? Do I look greedy? I'm only doing this for the emperor and this country". Tal-tal said, "The people of this country don't exist in your principle. You don't look after them. That's greed for power".

"[Spoiler] "Empress Qi" Why did Jin Yi-han betray Kim Young-ho?"
by HanCinema is licensed under a Creative Commons Attribution-Share Alike 3.0 Unported License.
Based on a work from this source