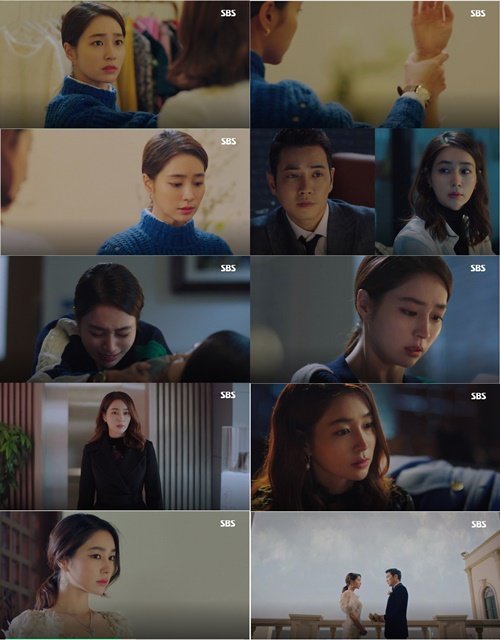 On the latest episode of the SBS drama "Fates and Furies", Jin Tae-oh (Lee Ki-woo) threatened Goo Hae-ra (Lee Min-jung) with the fact that he knew she approached Tae In-joon (Joo Sang-wook) on purpose, and Goo Hae-ra glared at Cha Soo-hyeon (So Yi-hyun) who tried to hit her.

Tae In-joon announced his engagement with Cha Soo-hyeon at a launching event. Jin Tae-oh was outraged and headed for the hospital where Goo Hae-ra's sister Goo Hyeon-joo was admitted in and removed her respirator. Then he strangled Goo Hae-ra and threatened her to seduce Tae In-joon and break off his marriage. Even while she was being strangled, Goo Hae-ra floundered with fear and fury in her eyes.

Goo Hae-ra transformed into a new look and appeared at the office with Jin Tae-oh, bringing about a twist in the drama.

Goo Hae-ra appeared at the engagement party with a present that was a replica of her mother's last pair of shoes, weakening Tae In-joon.

In the end, she yelled, "Don't get married!" and officially started seducing Tae In-joon.

"[Spoiler] "Fates and Furies" Lee Min-jung Seduced Joo Sang-wook "
by HanCinema is licensed under a Creative Commons Attribution-Share Alike 3.0 Unported License.
Based on a work from this source