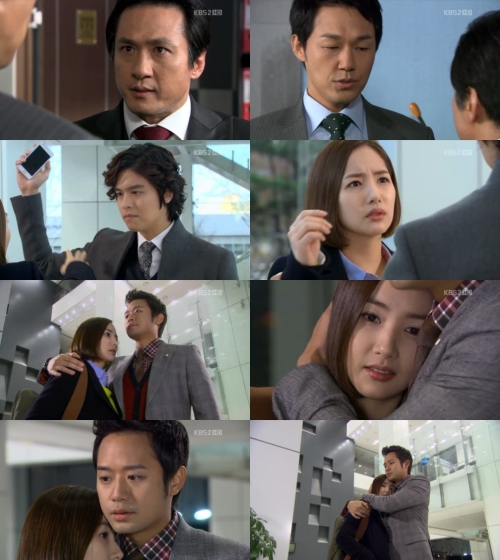 Chun Jung-myung and Park Min-young exchanged feelings for each other and started romance in the KBS 2 drama "Glory Jane".

Young-gwang (Chun Jung-myung) found out that Jane (Park Min-young) wasn't his half sister and was in shock while Seo Jae-myeong (Son Chang-min) realized who Jane was.

In shock after learning Jane's birth secret, he hid himself by not going to work and unnoticed. Jane pleaded to Heo Young-do (Lee Moon-shik) to give him another chance.

Seo Jae-myeong coincidentally discovered who Jane was and was in shock. He went to Seo In-cheol (Park Sung-woong) and raged, "How could you betray me like this?" and In-woo (Lee Jang-woo) said, "I wanted to protect her" saying it wasn't Seo In-cheol's fault.

Feeling at risk, Seo Jae-myeong ordered Heo Young-do to bring him things related to Yoon Jane but he refuses.

In-woo confessed his love for Jane while seeing how she continued to call Young-gwang she told her they could disappear just like that but Jane didn't hide her feelings for Young-gwang.

While Jane was worried, Young-gwang returned to the office and told Jane, "If I don't come then it's the end for you isn't it" and held her head in his chest.

Young-gwang started to openly reveal his feelings for Jane after such a long time of trying to hide his feelings. He pulled her with one arm and hugged her much harder.

This was enough to let know the start of their touching relationship.

Meanwhile, as In-woo continues to show his honest feelings for Jane, it seems that there will be a three way love relationship.

"[Spoiler] "Glory Jane" Cheong Jeong-myeong, Park Min-young and Lee Jang-woo in three way love line"
by HanCinema is licensed under a Creative Commons Attribution-Share Alike 3.0 Unported License.
Based on a work from this source