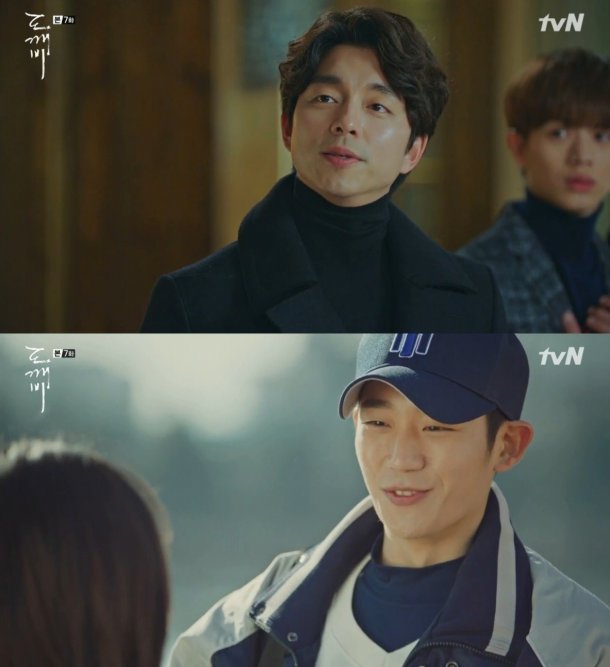 Jung Hae-in who made a special appearance in "Goblin", recalled the time he met Gong Yoo.

Ji Eun-tak (Kim Go-eun) was at the school she had a test at and met Choi Tae-hee (Jung Hae-in).

Ji Eun-tak was about to be hit by a baseball on campus. A baseball player caught the ball for her and she knew that he was her first love Choi Tae-hee. They recognized each other.

Kim Sin went to see Choi Tae-hee at practice. Gong Yoo yelled, "You're too handsome!" and Choi Tae-hee replied, "I am, kind of".

Tae-hee asked Kim Sin if they'd met before. Kim Sin said no and Tae-hee recalled the time they came across each other on a baseball field when he was just a kid.

Tae-hee had taught Gong Yoo how to play baseball but Kim Sin's ego had been hurt. They made a bet to grant the winner's wish and of course Tae-hee won.

Kim Sin still pretended not to know although he remembered. Tae-hee said, "Maybe that wasn't you. You're too young anyway".

"[Spoiler] "Goblin" Gong Yoo sees Jung Hae-in, "So handsome", thinks Lee Dong-wook is Kim Go-eun's father "
by HanCinema is licensed under a Creative Commons Attribution-Share Alike 3.0 Unported License.
Based on a work from this source