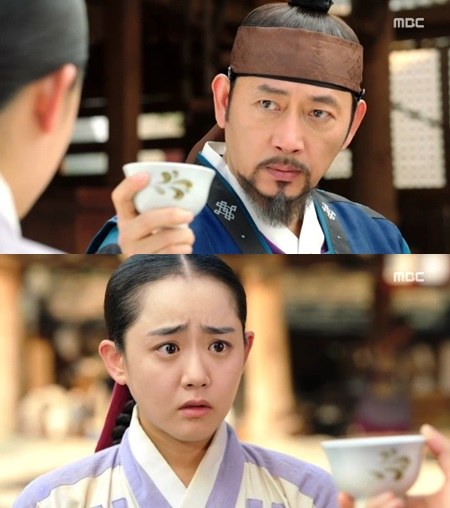 Lee Kang-cheon started suspecting her when Yoo Tae-pyeong beat Lee Yook-do (Park Gun-hyung) with amazing talent and said that she gives the honor to her pottery dealer father.

Lee suspected that she might be Yoo Eul-dam's daughter. He called on Sim Jong-soo (Sung Ji-ru) and checked that the daughter of Yoo Eul-dam was dead for sure.

Sim Jeong-soo replied, "She fell off the cliff with her father. Her body was washed away in the tides but if she was alive, there was no way she wouldn't even come see her father at his grave". Lee thought he'd worried too much.

However, he found out that Yoo Tae-pyeong had drawn the picture on the plate given to Gwang-hae (Lee Sang-yoon) as bribe and was furious when he found Yoo Eul-dam's teacup in her belongings.

"[Spoiler] "Goddess Of Fire Jeongi" Jun Kwang-ryul finds Moon Geun-young's father's teacup"
by HanCinema is licensed under a Creative Commons Attribution-Share Alike 3.0 Unported License.
Based on a work from this source