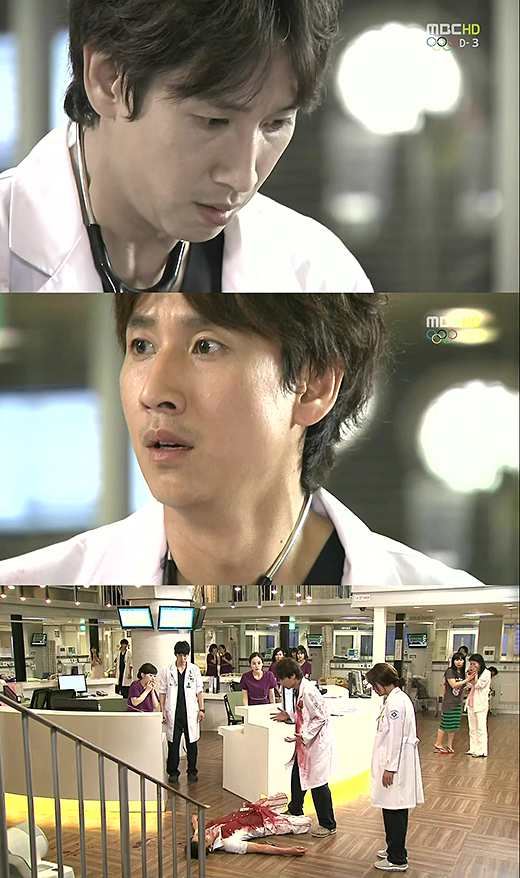 If you were angered by "Golden Time", you're normal.

There was a very angering scene in the episode of the MBC drama "Golden Time" on the 24th. There was a high school student covered in blood in the ER. She was hit by a bus and a metal piece was lodged in her throat where the artery is. She also seemed to have compound fractures and a rupture and required a major surgery.

20 doctors ended up surrounding this patient after various calls. General surgeon Kim Min-joon (Uhm Hyo-sup) said, "We will join the surgery once the artery surgery is done". Orthopedic Hwang Se-heon (Lee Ki-young) also claimed, "I will come and do surgery once it's done".

However, there was no doctor to operate on the artery first. Lee Min-woo (Lee Sun-kyun) ran around everywhere and knocked on doors but they all said they had no time. Neurosurgeon Kim Ho-yeong (Kim Hyung-il) said, "It's going to be death on the table if you go into surgery like this. I think it's right that you send her somewhere else if you don't have what it takes".

In the end the patient was moved. Lee Min-woo was worried and tried to follow her but he couldn't and that was the last of the high school girl.

Every life is precious but the way the doctors avoided the teenage girl covered in blood, to avoid 'table death' makes one feel bitter. Viewers say, "I am upset that they are showing the exact reality", "Are those people even doctors?" and more.

"[Spoiler] "Golden Time" 20 doctors push around patient, high school girl dies"
by HanCinema is licensed under a Creative Commons Attribution-Share Alike 3.0 Unported License.
Based on a work from this source