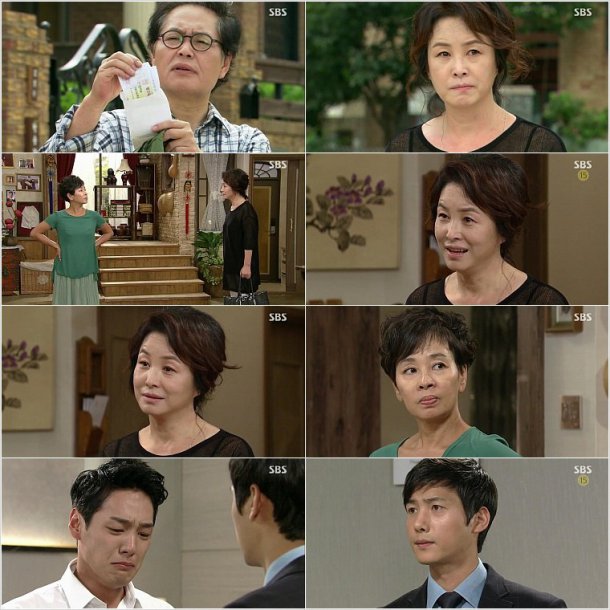 On the twenty-ninth episode of "Good Day", Han Song-jeong (Kim Mi-sook) ran into Jeong In-seong (Kang Nam-gil) on her way out of the house.

In-seong called her over when she was about to walk past him and showed her the bag of money from Kim Sin-ae (Lee Mi-yeong). He said, "She gave me this and told me to break apart Da-jeong and your son. Is that all? She asked me to resolve things with you, too". Song-jeong was shocked and went to see Sin-ae right away.

She asked, "How could you do this?" but Sin-ae acted like she didn't know anything. Song-jeong was furious at her reaction and said, "I pretended to not know what you have done to Da-jeong. Our children like each other!" Sin-ae said, "I can't let them be just because they like each other".

Song-jeong retorted, "Are you sure you're doing this for your child? It's just you being hysterical". Sin-ae agreed, "Yes, I am. My son is special. How can I send him away to a house like yours?"

Song-jeong said, "Do you think you have nothing to hide? My daughter's mother-in-law to-be is someone who pays people to break up relationships...what's a bigger disappointment than that? How could you do something like that? Will you take Da-jeong in if I don't say anything and get married again? I am someone who does anything for her children". She held back the tears that were welling up at the unbelievable situation.

Despite Song-jeong's resolute attitude, Sin-ae said, "So, this is who you really are? How did you manage to keep it in all this while?" Song-jeong said, "So, I am not going to hide it anymore. As a parent, I really don't understand you".

However, Sin-ae said, "Who made me like this? You wanted money and I gave it to you. Is that my fault?"

Song-jeong couldn't believe how ridiculous Sin-ae was being and said, "Let me just say one more thing. You and your son, you think you are so high and mighty that you can do all this? Now that I know how great your son is, I want him. I want him to become by son-in-law".

Jae-woo (Lee Sang-woo) was walking into the house as she turned around to leave and she provoked Sin-ae by telling him to follow her.

Viewers say, "Sin-ae is hurting Jae-woo and now Song-jeong. When will she learn? I can't even imagine how great Song-jeong's disappointment might have been", "I feel In-seong is changing a little so I'm glad", "There's not a day that goes by without Sin-ae causing some sort of trouble", "What will happen to Da-jeong and Jae-woo?" and more.

Gwak Si-yang who had been wandering around Ko Woo-ri was uncovered of her identity by Lee Sang-woo and cried.

After Jeong Da-ae's wedding, Jae-woo asked Jeong Hee-joo about the truth and she froze. He murmured to her into telling him and she eventually said, "I heard what Han said before my mother died".

"I didn't mean anything. I stole Da-in's last name. Da-in is Han Da-in and not Jeong Da-in because I stole it from her. I wanted to repay my debt to her by carrying her bags and running errands".

Jae-woo comforted her and said it wasn't her fault. She let the tears spill and started crying.

Jae-woo felt bad for Hee-joo and said, "Tell Han's family whenever you feel like it". However, Hee-joo said, "No, then they won't see me anymore". Da-jeong came in just then and witnessed Hee-joo walking out wiping tears and made her curious.

"[Spoiler] "Good Day" Kim Mi-sook challenges Lee Mi-yeong"
by HanCinema is licensed under a Creative Commons Attribution-Share Alike 3.0 Unported License.
Based on a work from this source