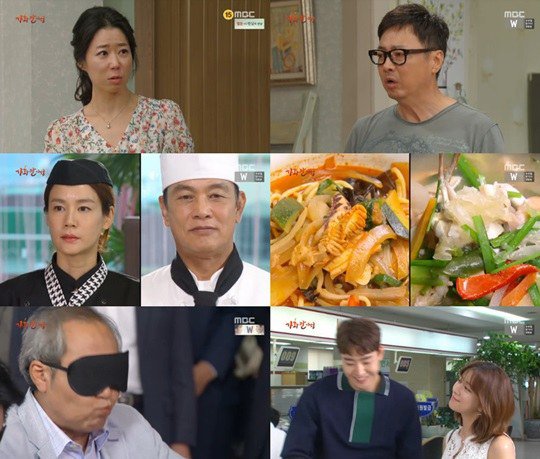 Bong Sam-bong warned Han Mi-soon to leave the neighborhood if she lost and Han Mi-soon said, "Alright, but if I win, you have to send Jin-hwa and Seon-hwa to me with an apology".

Bae Sook-nyeo (Won Mi-kyung) couldn't watch. Bong Sam-sook (Ji Soo-won) asked if she would like Bong Sam-bong to lose and she said, "No, I want him to lose".

Han Mi-soon surrendered and said, "I guess I was way over my head. I can't believe I battled you with this skill of mine".

However, the friend who tasted their food blindly knew which one belonged to whom. Although Han Mi-soon's was better, he voted for Bong Sam-bong. The preview of the next episode showed that the result was going to be upturned.

Meanwhile, Oh Min-jeong (So Hee-jung) was pregnant. However, Bong Sam-sik (Yoon Da-hoon) was in shock and asked if she was really going to have the baby.

Bong Hae-won (Choi Yoon-so) registered marriage with Lee Kang-min (Park Min-woo). She told his parents, "I need to take him for myself". Then she turned to him and asked if he wanted to be the son of HS Group or Alkong's father. She even got the police to get him out of his house.

Bong Hae-won said, "I wasn't going to marry you, but I'm doing it because your life is so pitiful" and Lee Kang-min asked if he could go clubbing every once in a while.

"[Spoiler] "Happy Home" Choi Yoon-so, Park Min-woo register for marriage and Yoon Da-hoon is surprised at So Hee-jung's pregnancy"
by HanCinema is licensed under a Creative Commons Attribution-Share Alike 3.0 Unported License.
Based on a work from this source