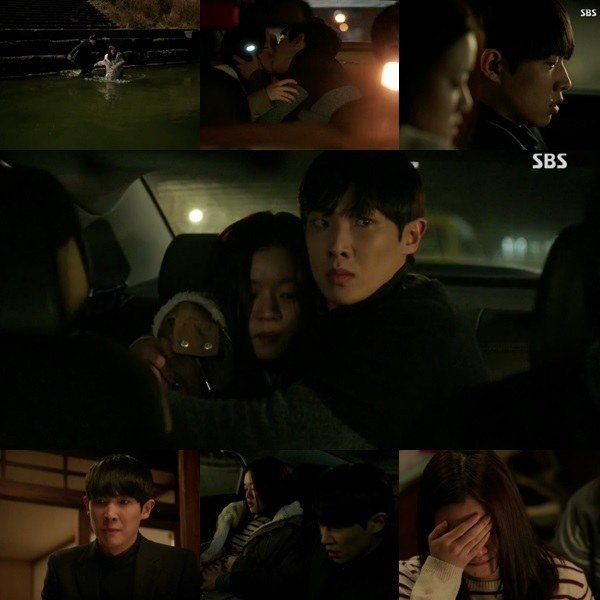 On the first episode of SBS' Monday & Tuesday drama, 'Heard It Through the Grapevine', In-sang (Lee Joon), a high school student whose future has paved road ahead, spent a night with Bom (Go Ah-sung), whom he met at a camp, which resulted in having her become pregnant.

"Heard It Through the Grapevine" is a black comedy that satirizes the presumptuous and materialistic ideas by the top upper class in Korea, who thrive on inherited wealth and lineage.

Through their previous collaboration in "Secret Love Affair", writer Jeong Seong-joo and producer Ahn Pan-seok depicted the hypocrisy and corruption of the upper intellectuals by portraying the dark sides of classical music field.

Through 'Heard It Through the Grapevine' this time, they are again going to talk about the sensational topics such as teenage pregnancy and birth as well as the light and darkness of our society. As expected, the script writing and direction of the duo shined beginning with the first episode.

The first episode was about the one feverish night between In-sang and Bom. Being teen high school students, they could not control their emotions thinking they would not be able to see each other after the camp until they get into colleges and they ended up spending a night together. Bom became pregnant consequently. However, Bom did not tell this to In-sang and prepared for birth alone.

But In-sang had no idea about it because Bom stopped contacting him. In-sang noticed there was something weird going on when he heard Bom was preparing for High School Equivalency Certificate. He asked one of the employees at his father's company for help and found out Bom's personal information and went to see her.

The pregnancy situation was tough for In-sang and Bom, who were high school students. Although he was deeply shocked to find out about Bom's pregnancy, In-sang in his bewilderment told Bom's father, Hyeong-sik (Jang Hyun-sung) he would marry her and be responsible for it. And then he brought her to his home.

However, the situation was too shocking for In-sang to deal with easily. He went to Han River to kill himself and Bom became angry with his behaviors and she herself went into the water. In-sang and Bom finally came to consciousness and got into a taxy home. They asked for understanding from the taxi driver first and then the two kissed in the taxi.

While it is clear how difficult things will be for In-sang and Bom, it is drawing attention as to how producer Ahn Pan-seok and writer Jeong Seong-joo will move the story forward solving the problems of the two.

"[Spoiler] 'Heard It Through the Grapevine' First episode delivers successful beginning of black comedy "
by HanCinema is licensed under a Creative Commons Attribution-Share Alike 3.0 Unported License.
Based on a work from this source