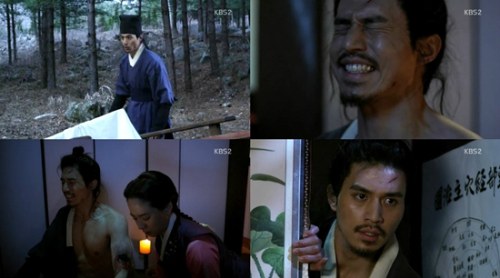 Lee Dong-wook dug through the case with the help of Song Ji-hyo and some clues.

On the episode of the KBS 2TV drama "Heaven's Order" on the 8th of May, Choi Won (Lee Dong-wook) personally investigated the case based on Hong Da-in's (Song Ji-hyo) testimony and clues from 'Book of The Turtle'.

Choi Won demanded Hong Da-in told him about the ornament. She told him that he was her life saver.

He also once escaped danger with her help.

Choi Won and the crowned prince Lee Ho (Im Seulong) traced back to the death of Min Do-seng (Choi Phillip) and tracked the case with clues from the 'Book of The Turtle'.

Choi Won found out about Deok-pal (Jo Dal-hwan) and told Da-in to stay out of this case. Choi Won moved himself prove himself innocent.

"[Spoiler] "Heaven's Order" Lee Dong-wook looks for clues"
by HanCinema is licensed under a Creative Commons Attribution-Share Alike 3.0 Unported License.
Based on a work from this source