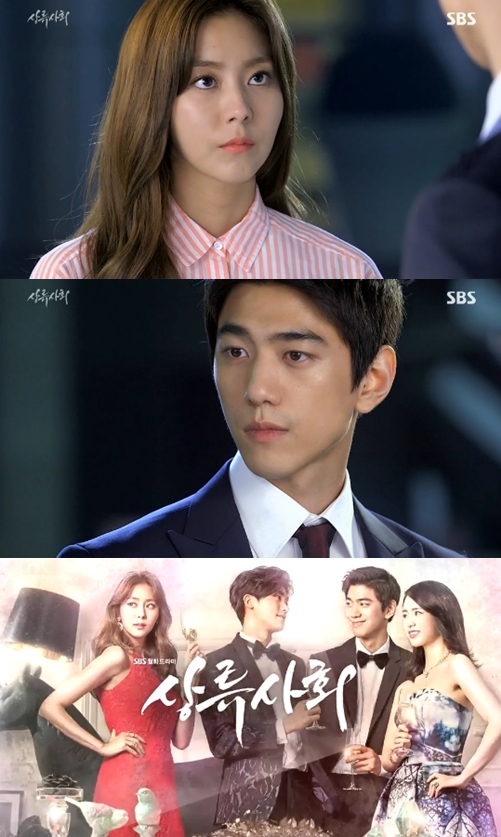 "High Society" depicts the interlaced love stories among the four young people: Jang Yoon-ha (UEE) from chaebol family, who can throw away everything in order to achieve true love, Choi Joon-gi (Sung Joon), who throws away everything he has in order to fulfill his ambition, Lee Ji-yi (Lim Ji-yeon), who has to choose between friendship and love, Yoo Chang-soo (Park Hyung-sik), whose life is in trouble because of one woman, the only thing he cannot own despite the fact he can own everything else he wants.

Firstly, Jang Yoon-ha (Lee Ji-yi) appeared as a part time worker who works in a grocery store. Jang Yoon-ha's character as a woman who seeks true love over conditional love or money added a refreshing touch to the beginning of the drama.

On the contrary, Choi Joon-gi (Park Hyung-sik), who was born in a poor family and sought after success, prioritizes conditions and money over love.

How the two clearly contrasting characters will be interlaced throughout the drama is drawing attention. As Choi Joon-gi was assigned to the department where Jang Yoon-ha and Lee Ji-yi work together, the relationship will become more complicated.

The refreshing appeals by the four actors and their acting performances are the focal points of the drama. While Park Hyung-sik revealed his appeals playing the second generation chaebol figure, Sung Joon and UEE also led the storyline with their stable acting performances. Lim Ji-yeon, whose acting career was mostly on big screens, also immersed herself into her role with her natural acting performances.