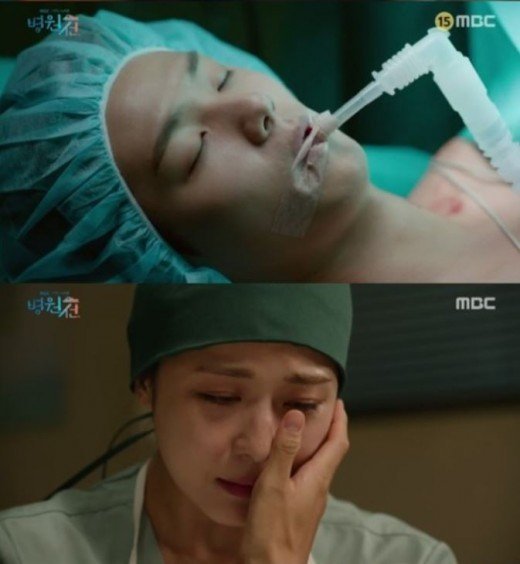 On the latest episode of the MBC drama "Hospital Ship" Kwak Hyeon (Kang Min-hyuk) expressed his love even while his life was in danger.

A group of gangsters kidnapped Song Eun-jae and Kwak Hyeon, threatening and ordering them to operate on their boss. Kwak Hyeon and Song Eun-jae tried to convince them the operation had to be done in the hospital.

The gangsters told them to end it in three hours. If they were even a minute late, everyone in the hospital would die. When the operation finished, the gangsters took Song Eun-jae hostage for post treatment.

Kwak Hyeon tried to save her by telling them it was better they took him and not her. Just then, the maritime police showed up and the gangster pointed a gun at Kwak Hyeon.

Kwak Hyeon was shot unconscious and Song Eun-jae operated on him. When he came to, the first thing he asked was, "Are you hurt?" Song Eun-jae cried tears of relief.

"[Spoiler] "Hospital Ship" Ha Ji-won and Kang Min-hyuk risk their lives for love"
by HanCinema is licensed under a Creative Commons Attribution-Share Alike 3.0 Unported License.
Based on a work from this source