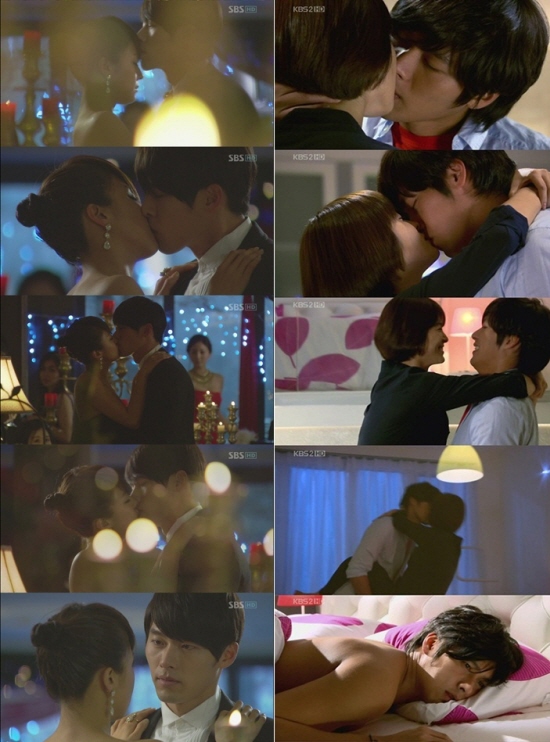 The concerning kiss scene was about 40 seconds long in the SBS weekend drama "Secret Garden" with Kim Joo-won (Hyeon-bin) and Gil La-im at the VVIP end of year party.

In the SBS "TV Entertainment at Night" when Hyun Bin was asked if there was another drama where there was such a long party kiss scene, he replied "In "Worlds Within" (drama he took with his actual lover Song Hye-kyo), the kiss scene I had with her was also very long".

Hyun Bin and Ha Ji-won have taken 3 kiss scenes in the drama "Secret Garden", at the party, when they changed bodies and on the bench in Jeju-do.

Hyun Bin also confessed the "sit-up scene" made his heart flutter although it wasn't a real kissing scene.

The sit-up scene wasn't a real kissing scene but it went just as close to every time Hyun Bin sat up and his face was inches away from Ha Ji-won's.

Meanwhile, Hyun Bin is having another one of his best times thanks to the drama "Secret Garden", following once when he was in "My Name is Kim Sam-soon".

"[Spoiler] Hyun Bin "Long party kiss scene with Ha Ji-won? With Song Hye-kyo too in "Worlds Within"""
by HanCinema is licensed under a Creative Commons Attribution-Share Alike 3.0 Unported License.
Based on a work from this source