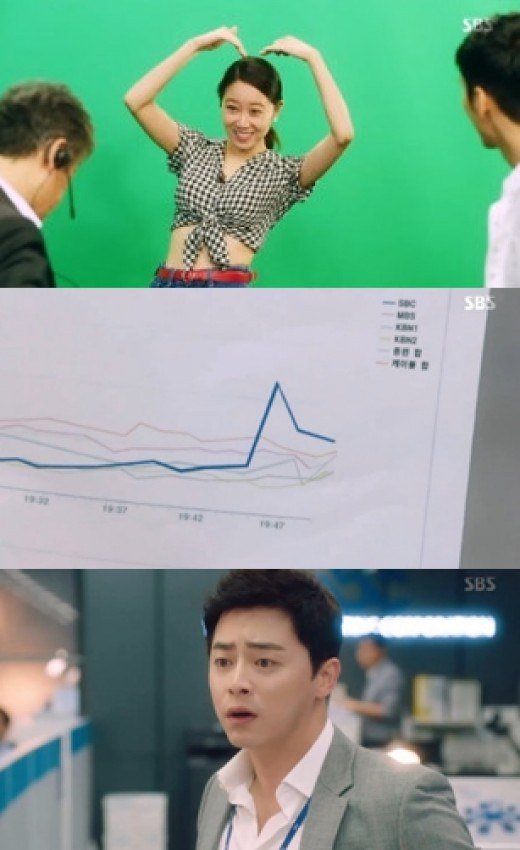 On the Wednesday episode of SBS' "Incarnation of Jealousy", Pyo Na-ri (Gong Hyo-jin) as a weather reporter hosted her last weather forecast.

It was all because Pyo Na-ridelivered the weather news while she was drunk and wore a cropped top and a pair of mini shorts. And the head director of news department was upset and fired Pyo Na-ri.

Next day, Lee Hwa-sin (Jo Jung-suk) became angry about the decision to fire Pyo Na-ri. As the head director had been judging even news reporters by the viewership rating, Lee Hwa-sin shoved the detailed records of the viewership rating of the Seven O'clock News Show in front of the director of the news department. According to the records, the weather forecast by Pyo Na-ri recorded the highest rating per minute, which surprised everyone.

Lee Hwa-sin rebutted saying, "She is someone who recites the prepared script but goes out and cover the news by herself. If you cannot call her a weather forecast expert, what is she then?"

"[Spoiler] 'Incarnation of Jealousy' Gong Hyo-jin brings surprise to the management"
by HanCinema is licensed under a Creative Commons Attribution-Share Alike 3.0 Unported License.
Based on a work from this source