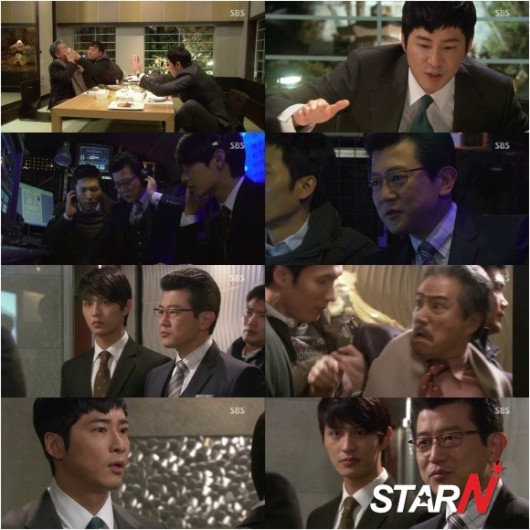 Park Sang-min figured Kang Ji-hwan out in the SBS drama "Incarnation of Money".

Ji Se-kwang was phone tapping Lee Cha-don and his client when Lee said, "I live in the name of honor as a prosecutor and I refuse to be solicited". Ji Se-kwang laughed, "Tricks can be played by tricks".

Ji Se-kwang went to the location and asked the client to go with him for investigation and added to Lee Cha-don, "You did a good job".

Lee Cha-don hesitated and the client thought he had been tricked. Ji Se-kwang who pretended like he didn't know anything said, "Now we can catch Shudal".

Meanwhile, Bok Jane (Hwang Jung-eum) took revenge on Eun Bi-ryeong (Oh Yoon-ah) who yelled at her, "How dare a bartender talk back to me?"

"[Spoiler] "Incarnation of Money" Park Sang-min comprehends Kang Ji-hwan's trick"
by HanCinema is licensed under a Creative Commons Attribution-Share Alike 3.0 Unported License.
Based on a work from this source