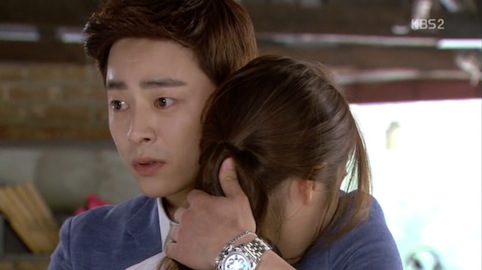 Only one good thing about this show...it's almost over.

AGB Nielsen Nationwide had this episode coming in at 30.8%.

"Lee Soon-sin is the Best" is directed Yoon Seong-sik by and written by Jeong Yoo-kyeong and features IU, Cho Jung-seok, Go Doo-shim and Lee Mi-sook.

Jung-ae tells Mi-ryeong to get out of their lives, which makes Mi-ryeong's nasty temper flair. She asks if Soon-shin wants her to disappear and Jung-ae says it's for her benefit. Mi-ryeong sneers that Jung-ae can't stop pretending to be her one and only mother.

Guh, Mi-ryeong birthing someone doesn't make you a mother.

Mi-ryeong says she never liked Jung-ae and always thought she was gross and hated how she acted like she was Soon-shin's only mother, like Mi-ryeong never could. Really Mi-ryeong? This is about who's a better mom? Really? She says she's Soon-shin's mother and she cares and not to tell her what to do. Only Soon-shin can say it.

Jung-ae speaks up and asks how she can be so bold. Who cause Chang-hoon's death? She's holding back for Soon-shin's sake. She asks if Mi-ryeong even cared about her daughter getting hurt. Mi-ryeong leaves to collapse outside as though she actually deserves to feel wronged.

I'm trying to remember why I liked this show at some point, but I just can't seem to.

Mi-ryeong goes home to look at the picture of her and Soon-shin. Hwang says that Mi-ryeong's innocent according to law and just has to worry about gossip. She ignores him.

Jung-ae goes home and finds Granny scolding Soon-shin for keeping the secret and warns her to never go back to Mi-ryeong or she'll break relations with her. Jung-ae tries to stop her, but Granny thinks she's justified. She leaves and Jung-ae sits down in front of the crushed Soon-shin. She can only apologize to her mother. She wishes she hadn't been born to cause all of this trouble. Jung-ae says that Soon-shin was hurt most and tells her not to blame herself.

Yoo-shin sets up a barbeque and says Gil-ja should be treated like a princess while Yoo-shin works. They take pictures and try to keep Bok-man and Gil-ja from fussing. Later, Yoo-shin and Chan-woo hang by the pool and Chan-woo is happy because his parents seem to be having a good time. He feels bad that his mother has had to work so hard that she hasn't taken many vacations in her life. He thanks Yoo-shin.

Turns out Yoo-shin was regretting not going on trips with her parents before her father died because she was always too busy. Chan-woo offers to go on a family trip with her family next time. They flirt a little and he wants a kiss. She denies him a bit and then gives him one.

Joon-ho visits Mi-ryeong to ask about the Investigation. Hwang doesn't want it to happen because both Mi-ryeong and Soon-shin will be hurt by the media. Joon-ho asks what Soon-shin's opinion is. We all know what Soon-shin wants: the truth and an apology.

Joon-ho heads to Soon-shin's, but she doesn't pick up her phone. The next morning he meets his father as he heads out to be investigated. Soo-jung and Yi-jung overhear and ask what happens.

Mi-ryeong gets ready and takes strength from the portrait and Soon-shin's gift. She tells Hwang she's going to the police station, not abroad. He's not happy, but he takes her. They meet Dong-hyuk there and Reporter Park. Hwang grabs Park by the collar and I'm wondering if he feels guilty for starting this mess. Remember? He got drunk at the beginning and told Park everything?

Mi-ryeong orders Hwang to release Park. He will release the article on her today. Mi-ryeong merely smiles and basically says, "You win". Then she walks away.

Young-hoon approaches Joon-ho about Yeon-ah's threat. He doesn't get very far because the news about Mi-ryeong and the accident breaks.

Joon-ho worries about Soon-shin who has to listen to everyone on set gossip about Mi-ryeong and her father. Chan-mi worries for her and she should. The idiots on set keep gossiping.

Reporters keep calling Jung-ae's house and Hye-shin says that there is gossip going around about Soon-shin as well.

The newlyweds take the feuding Bok-man and Gil-ja out for food and fun. The older couple bickers, but they are getting along better. It's basically a lot of wasted time. The only plot point is that Yoo-shin overhears two girls gossip about Mi-ryeong and Yoo-shin finds out about the scandal. She freaks out and so Chan-woo decides to take her back to Seoul. They leave the parents there for more fun.

On set, a bunch of idiots are gossiping and get shut up by the director. Between scenes, Chan-mi and In-sung talk about how people are making up malicious rumors. Soon-shin is even being implicated because she's related to Mi-ryeong. She might not be able to finish shooting the drama.

Soon-shin has missed calls from Mi-ryeong. Then she gets a visit from Yeon-ah who asks, with genuine concern, if she's okay. But Soon-shin isn't in the mood and walks away, telling Yeon-ah to ask Mi-ryeong how she's doing herself.

Then Young-hoon finds Soon-shin and drags her upstairs for a chat. His character is pretty much useless now. He just has stupid chats with everyone. Well, in the next scene he's a little less useless. He pities Soon-shin's situation and then tells Soon-shin about Yeon-ah's threats. Joon-ho broke up with her because of them. Young-hoon says Joon-ho is an idiot, but now he's having a hard time and is blaming himself for hurting her. Young-hoon asks Soon-shin to forgive the Fool and I'm really hoping she does, or else this thing could cycle on.