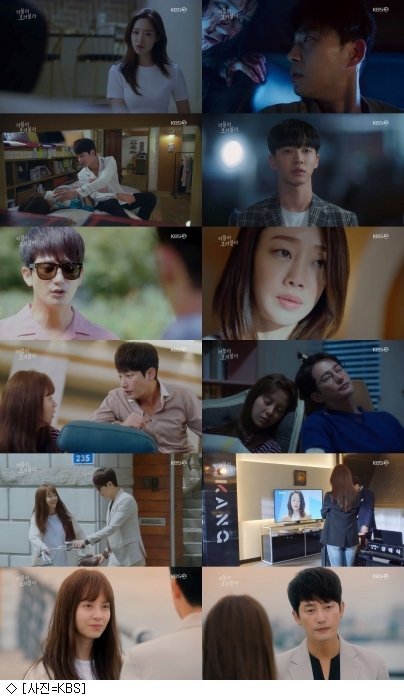 On the latest episode of the KBS 2TV drama "Lovely Horribly", Phillip (Park Si-hoo) and Eul-soon (Song Ji-hyo) were getting romantic and the past between Phillip and Dong-cheol (Ji Seung-hyun) surfaced.

Thanks to Eul-soon's devotion, Phillip woke up from his coma. He gave her his apple tree pendant and gave up being lucky for her. However, instead of bad luck, things took a turn to his favor and everything started working out better than ever. Eul-soon also stopped hearing mysterious songs.

When nothing happened to these two people where one couldn't be happy while the other was, Phillip started to get anxious. He was worried Eul-soon would get hurt, so he started to stay away from her. However, he only grew fonder of her. He tried to run away from her, but she threw the apple tree pendant in the sea.

The past between Phillip and Dong-cheol was revealed. Phillip felt uncomfortable because he thought Dong-cheol committed acrime because of him. Dong-cheol tried to escape to another country, but he suffered from hallucinations and the voice of Soo-jeong (Kim Ji-eun) he killed. In the end, it seemed like Dong-cheol was going to throw himself into the waters according to Soo-jeong's words, "I won't die alone".

It was Yoon-ah (Ham Eun-jung) who went to Eun-yeong's (Choi Yeo-jin) house in a white dress on the day Soo-jeong got killed. They met again in the hospital secretly. Eun-yeong then appeared on TV and said she was original writer or "Ghostly Love" and betrayed Eul-soon. It also turned out that Eun-yeong was there when her assistant writer Soo-jeong was being threatened by Dong-cheol.

"[Spoiler] "Lovely Horribly" Park Si-hoo and Song Ji-hyo's Romance on Fire"
by HanCinema is licensed under a Creative Commons Attribution-Share Alike 3.0 Unported License.
Based on a work from this source