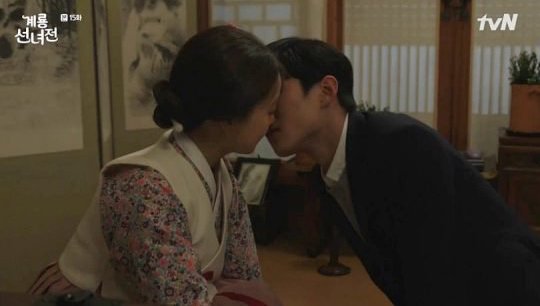 Moon Chae-won, Yoon Hyun-min and Seo Ji-hoon's secret of their past lives have been revealed.

Jung Yi-hyun (Yoon Hyun-min) was confused after he found out about his past life. The neighborhood ugly woman who tried to save him was offered as sacrifice to rid the town of bad luck and she was Kim Geum's (Seo Ji-hoon) former existence. Even when he was Ba Woo-sae (Seo Ji-hoon) he had tried to give up something of his own to save Lee Ji (Yoon So-yi).

Jung Yi-hyun who thought he was the only one in the world, realized the truth and wondered how he could make it all up. His rage and feeling of revenge was taking a turn of events.

Meanwhile, Sun Ok-nam (Moon Chae-won) and Kim Geum found the whereabouts of her winged-costume. However, Kim Geum worried that she'd fly away and told her his sincere feelings, telling her not to leave. Sun Ok-nam kissed him instead of an answer.

This day's episode ranked first in the same time zone on cable and IPTV, satellite, with an average of 3.7% of households, up to 4.4% of households

"[Spoiler] "Mama Fairy and the Woodcutter" Moon Chae-won and Yoon Hyun-min and Seo Ji-hoon's secret of the past revealed "
by HanCinema is licensed under a Creative Commons Attribution-Share Alike 3.0 Unported License.
Based on a work from this source