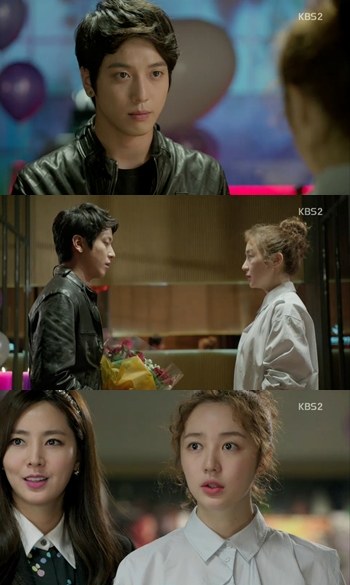 Park Se-joo (Jung Yong-hwa) from the KBS 2TV drama "Marry Him If You Dare" talked to Seo Yoo-kyeong (Han Chae-ah) about his complicated feelings for Na Mi-rae (Yoon Eun-hye) after she refused to go out with him.

Seo Yoo-kyeong told him, "The things you've done for her are nothing". She told him to do something even more extreme to get her attention.

Park Se-joo thought hard and saw a proposal on TV with roses.

He kept wondering what to do and told Seo Yoo-kyeong that Na Mi-rae wouldn't like an event. However, Seo Yoo-kyeong insisted he carried out the event as she thought to herself, "There will only be place for me when she's out of the picture".

In the end, Park Se-joo proposed to Na Mi-rae with roses and said, "I don't like these kind of things too but I thought I should do it at least once". He gave her a bouquet of flowers and told her that he liked her. However, she seemed extremely shocked.

Later, Kim Sin (Lee Dong-gun) found out what he did and was furious.

"[Spoiler] "Marry Him If You Dare" Jung Yong-hwa proposes to Yoon Eun-hye"
by HanCinema is licensed under a Creative Commons Attribution-Share Alike 3.0 Unported License.
Based on a work from this source