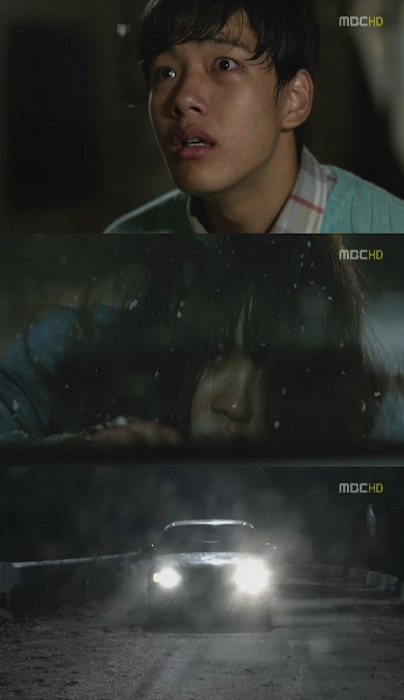 Yeo Jin-goo was saved from being kidnapped. Kim So-hyun who happened to be where Yeo Jin-goo was, was also kidnapped and tied up then run over by Kim Sun-kyung's car.

Soo-yeon was beat up by the men instead of Jeong-woo and was seriously injured. Jeong-woo tried to go out and get help and managed to call Han Tae-joon (Han Jin-hee).

Jeong-woo yelled that his friend Soo-yeon was in danger but Tae-joon didn't reply to that and just left the scene with Jeong-woo.

Soo-yeon managed to drag herself nearby to hide but ran into Hye-mi and Hyeong-joon. Hye-mi mumbled that something wasn't right and hit her with a car saying things could get ugly if she was left alive.

Meanwhile, Kim Seong-ho (Jun Kwang-ryul) realized instinctively that Soo-yeon was in danger as he investigated the scene.

"[Spoiler] "Missing You" Kim So-hyun hits by Kim Sun-kyung's car"
by HanCinema is licensed under a Creative Commons Attribution-Share Alike 3.0 Unported License.
Based on a work from this source