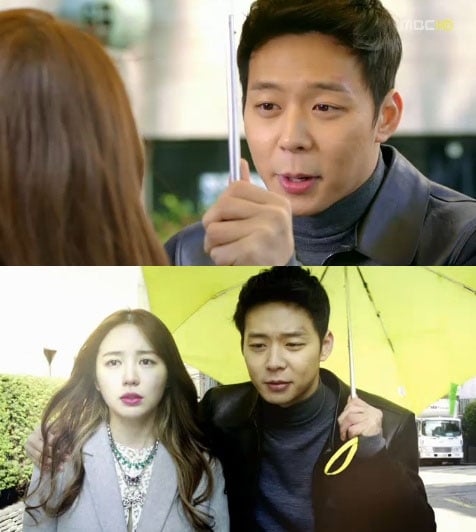 Park Yoo-chun made his move on Yoon Eun-hye first.

The seventh episode of the MBC drama "Missing You" showed that Han Jeong-woo (Park Yoo-chun) didn't let go of the fact that Joy (Yoon Eun-hye) was Lee Soo-yeon (Kim So-hyun).

While chasing after Kang Sang-deuk (Park Sun-woo) who was released from prison, he saw Joy's reaction on the CCTV when she saw Kang. She was terrified like she'd seen a ghost and Jeong-woo was sure she was Lee Soo-yeon.

He didn't have evidence but he had firm belief. He went after Joy and said, "I said I'd take you to that café by the river but I didn't keep my promise. Let's go now". He then treated her unblushingly and warmly. He even said, "You asked me to be your secret friend. It's boring. Let's be secret lovers".

"[Spoiler] "Missing You" Park Yoo-chun and Yoon Eun-hye "Let's date secretly""
by HanCinema is licensed under a Creative Commons Attribution-Share Alike 3.0 Unported License.
Based on a work from this source