[Spoiler] "Missing You" two mothers come together in tears 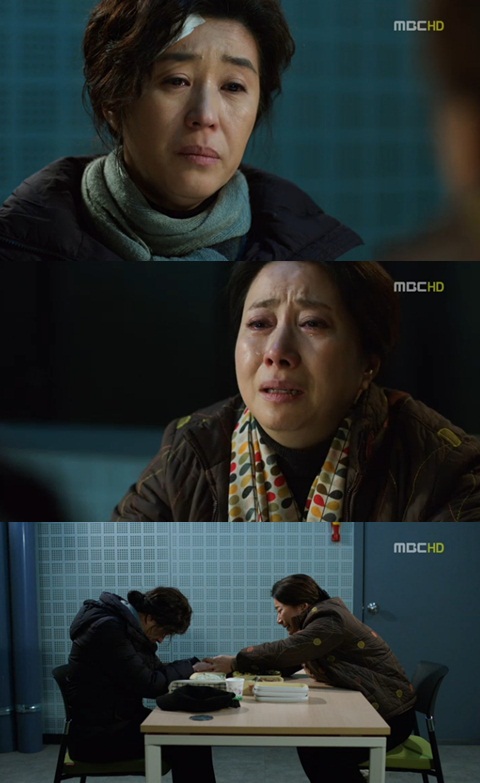 Song Ok-sook and Kim Mi-kyung faced each other.

On the eleventh episode of the MBC drama "Missing You", Soo-yeon's mom (Song Ok-sook) and Bo-ra's mom (Kim Mi-kyung) met each other.

Bo-ra's mother was questioned for the murder of Kang Sang-deuk the rapist. She told the reporters outside the station, "My daughter is dead. He didn't just rape her but murdered her". Lee Soo-yeon's mother (Yoon Eun-hye) Kim Myeong-hee sat in front of Bo-ra's mother in the interrogation room.

The two mothers just sat there looking at each other for a long time and Bo-ra's mother said, "It's strange. I'm sitting here but I feel comfortable". Kim Myeong-hee said, "I shouldn't say this but, thank you. Thank you" in tears.

"I am grateful you took revenge and I'm sorry you're being punished". She took her hands and said, "You shouldn't have killed him". Bo-ra's mother hung her head and started crying.

The two mothers were both the mothers of rape victims. Kim Myeong-hee's daughter Lee Soo-yeon was raped and hid her existence for 14 years. The police had wrapped up the case saying that she was dead. Bo-ra killed herself with only a will. However, Kang Sang-deuk, the man who did this to them was well and alive. The two mother's understood each other better than anyone else.

"[Spoiler] "Missing You" two mothers come together in tears"
by HanCinema is licensed under a Creative Commons Attribution-Share Alike 3.0 Unported License.
Based on a work from this source