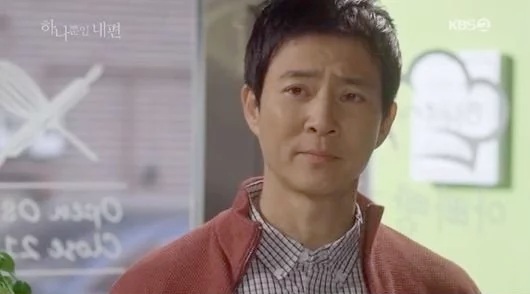 On the final episode of the KBS 2TV drama "My Only One", Kang Soo-il (Choi Soo-jong) requested a re-trial, and was found not-guilty. He also became an orphanage director.

Previously, Kang Soo-il had been in jail under the false charges of killing someone. Wang Dae-ryook (Lee Jang-woo) found some suspicious elements in his father-in-law's case, and realized that he'd been framed. He started investigating the truth, including the real criminal, Yang Yeong-dal (Lee Yeong-seok), but it wasn't easy.

Yang Yeong-dal tried to hide his crime. "I have lived a senseless life. I am sorry. I will get my punishment when I die. I can't let my one and only offspring live as the child of a murderer". However, when his son died of an accident, he decided to surrender himself, and confessed that he was responsible for the murder. This was reported in the news, and Kang Soo-il was no longer branded a 'murderer' after 28 years.

Kang Soo-il wanted his daughter, Kim Do-ran (UEE), to get along with his lover, Na Hong-joo (Jin Kyung), and wanted to end all ties with Wang Dae-ryook's family.

Kang Soo-il said to Do-ran, "I wish you'd meet with Tae-poong (Song Won-seok). Even when they called us 'murderer' and 'the daughter of a murderer', Tae-poong was by our side. That's why I like him. I wish you had dinner with him and got along".

However, Do-ran couldn't forget Wang Dae-ryook, and Kang Soo-il finally agreed to let them be. Kim Do-ran and Wang Dae-ryook got back together, and both families reconciled. Kang Soo-il set up an orphanage. His in-laws, Wang Jin-gook (Park Sang-won) and Oh Eun-young (Cha Hwa-yeon) helped out by providing presents and good for the facility during its one-year anniversary.

In addition, Kang Soo-il had an interview about the lifting of his charges. He said, "I don't believe it, and that time feels like a dream. I am grateful for those years, but back then I sometimes wished I wouldn't wake up from my sleep. I thought, if someone would have reached out to me when I was desperate, and stayed by my side when I had been braded a murderer, wouldn't my life have been different?"

Kang Soo-il and Na Hong-joo had a son, and they made amends with everyone they were in ill-fate with.

"[Spoiler] "My Only One" Touching Ending, Choi Soo-jong Found Not Guilty, Becomes Orphanage Director "
by HanCinema is licensed under a Creative Commons Attribution-Share Alike 3.0 Unported License.
Based on a work from this source