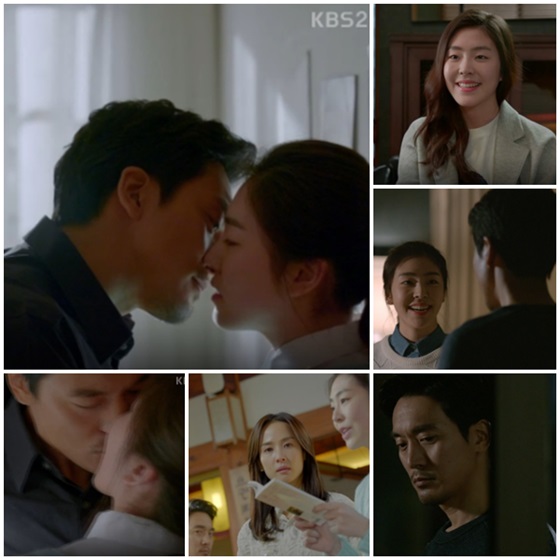 On the first episode of KBS 2Tv's Monday & Tuesday drama, "Babysitter", Yoo Sangwon (Kim Min-joon) and Jang Seok-ryu (Shin Yoon-joo) were drawn to each other for some inexplicable reasons.

For example, Jang Seok-ryu smiled a creepy smile while looking at Cheon Eun-joo and Yoo Sangwon couple hugging and cuddling with each other. Also when Yoo Sangwon was in his room alone, she stepped in as if it were a mistake. As if she would want to incite Yoo Sangwon's jealousy, she also had a sweet flirty phone conversation with Pyo Yeong-gyun (Lee Seung-joon) in front of Yoo Sangwon.

At the end of this episode Jang Seok-ryu's true character was revealed. As Yoo Sangwon attracted to Jang Seok-ryu and hesitated when he was about to kiss her, Jang Seok-ryu came closer to him first and gave him a passionate kiss. And then she asked, "Are you regretting already?" She also was ready to take off her clothes.

Shin Yoon-joo is a new actress, who debuted through movie "DongJu, The Portrait of A Poet" released in February this year. "Babysitter" is her first drama. People are wondering if Shin Yoon-joo, who grabbed a leading role in her debut drama, will be able to take in charge of her first leading role fully.

Shin Yoon-joo during the press conference previously said, "I have some difficulties to overcome because of differences between the apparent emotions and inner emotions of my character" and "I watched some helpful dramas and movies and practiced hard. I'll do my best".

The new actress Shin Yoon-joo, who surprised everyone with the unconventional acting performances in the first episode of her first drama is drawing attention as to what she will present in the next episode.