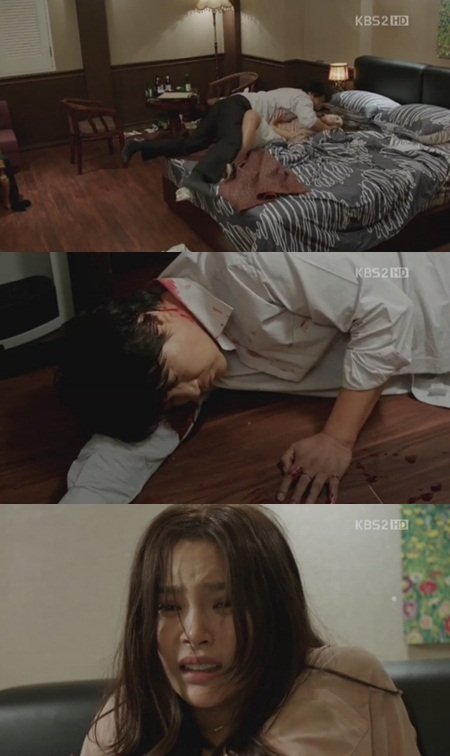 The truth about the murder 7 years ago was revealed.

KBS 2TV drama "Nice Guy" revealed the truth about the murder that Kang Maru (Song Joong-ki) took the blame for instead of Han Jae-hee (Park Si-yeon).

7 years ago, Han Jae-hee was a reporter and she headed to a motel with a tip-off. This executive staff member showed her evidence and said, "I am going to tell you all about chairman Seo Jeong-gyu's love for women, his plots, illegal real estate dump, manipulation of trade, accounting fraud and all that. I am going to destroy him".

However, Han Jae-hee looked through the documents and asked, "Do you think you can stop him with this? It will have impact but Tae San Group isn't going to be over. Think about it for a day and call me back again". She got up to leave.

This man seemed drunk and upset about her reaction. He said, "You know chairman Seo? I hear there is a reporter he has the hearts for and that's you isn't it? How are you so sexy?" and tried to rape her.

Jae-hee resisted and smashed his head with the alcohol bottle and he fell back, hitting his head on the drawer once again and falling down dead. Han Jae-hee was so shocked she called Kang Maru and he loved her so much that he took the blame for her.

"[Spoiler] "Nice Guy" Park Si-yeon's murder was rape defense"
by HanCinema is licensed under a Creative Commons Attribution-Share Alike 3.0 Unported License.
Based on a work from this source