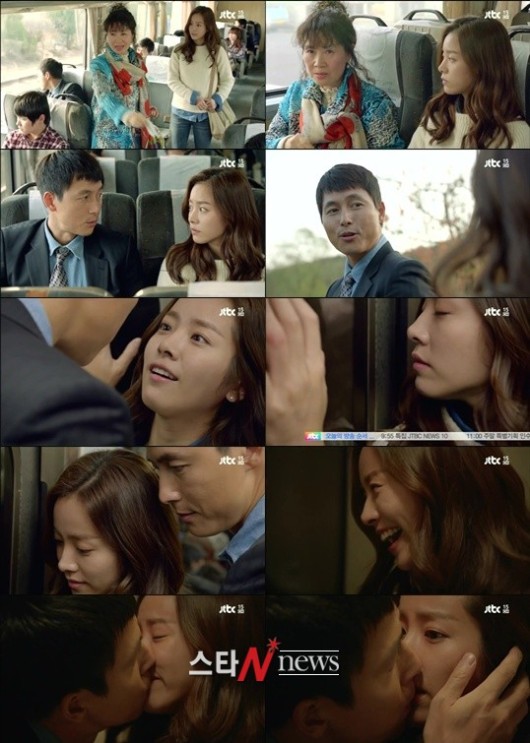 Yang Kang-chil (Jung Woo-sung) and Jeong Jina (Han Ji-min) had a train date in the JTBC drama "Padam Padam... The Sound of His and Her Heartbeats".

He couldn't help but be disappointed at the note from Jina saying, "I don't think I can keep the promise I made to go to the movies with you" but cheered up greatly when he read the next note that said, "But instead let's go somewhere on a train".

Kang-chil gave Lee Gook-soo the slip since he didn't know they were going on a date and kept asking Kang-chil to follow him, and bought two train tickets with excitement.

Jina arrived and saw him and smiled but they had to sit separately because a lady she ran into dragged her to sit together.

Seeing him in the train, the lady looked at him scornfully saying, "Isn't he the gangster and ex-convict". Jina tried to explain that this wasn't true so he got up, cutting her off and moved to another seat.

Jina looked at him with pity but he mouthed the words, "It's okay" and tried to comfort her. She then moved next to him and started talking.

When they arrived in the zoo, they had a sweet time like any other couple would have. Kang-chil showed Jina his feelings in the subway train by handing her a hair clip.

They got in the train headed for Tongyeong with a close call. They were laughing and having a good time when he suddenly kissed her.

"[Spoiler] "Padam Padam" Jung Woo-sung and Han Ji-min kiss in the train"
by HanCinema is licensed under a Creative Commons Attribution-Share Alike 3.0 Unported License.
Based on a work from this source