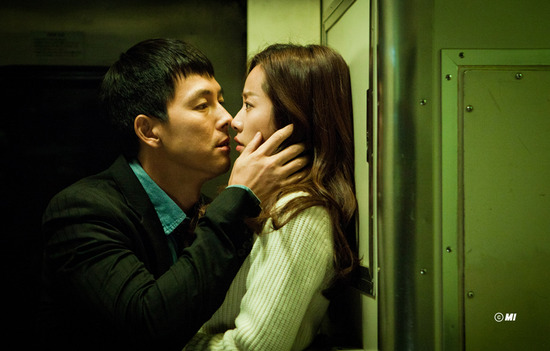 JTBC establishment special mini series "Padam Padam... The Sound of His and Her Heartbeats" is driving on in the lead of all programs in the same time schedule.

"Padam Padam... The Sound of His and Her Heartbeats" had an everage of 1% until the fourth episode. While Kang-chil (Jung Woo-sung) and Jina's (Han Ji-min) romance is progressing even further, the viewing percentage showed progress as well.

Jina and Kang-chil went on a date, riding the train instead of the movie she promised him and went to the zoo. Kang-chil couldn't help but feel excited at the things he was doing for the first time in his life and the excitement was greater because he was with Jina.

In the train back home, Kang-chil suddenly kissed Jina and couldn't help but feel puzzled.

"[Spoiler] "Padam Padam" viewing rate go over 2%"
by HanCinema is licensed under a Creative Commons Attribution-Share Alike 3.0 Unported License.
Based on a work from this source