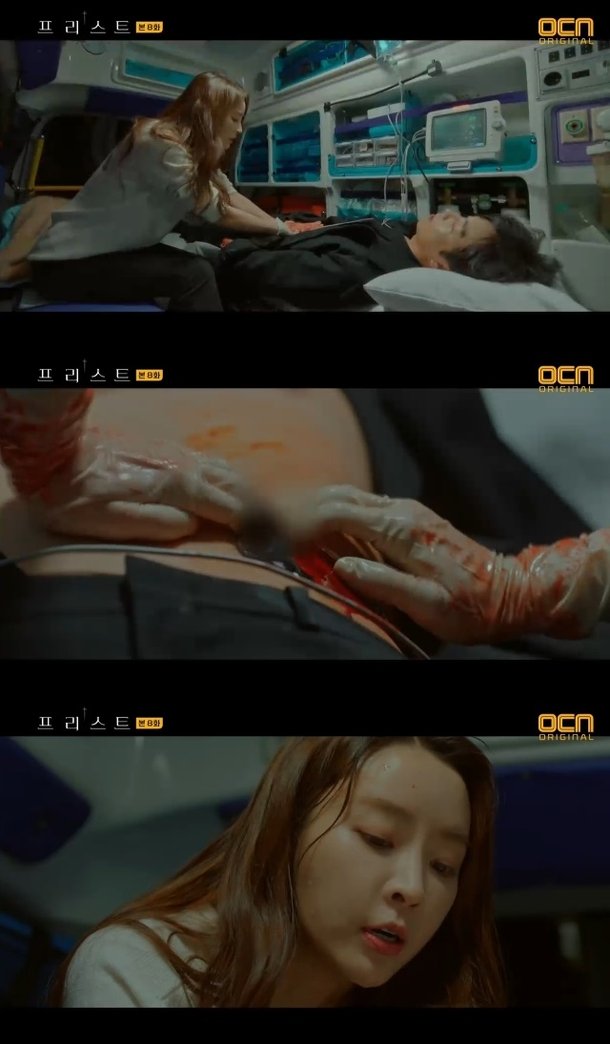 Ham Eun-ho took refuge in Sin Mi-yeon's (Oh Yeon-ah) gallery when Goo Do-kyoon (Son Jong-hak) became an exorcist and asked how Father Oh became a priest. Sin Mi-yeon said, "He's young, but he's been through a lot in his life. His mother was an exorcist too. He initially wanted to become a doctor, but he thought the priest's robes were cooler so he became one as doctors and priests both save lives.

Ham Eun-ho was surprised that Oh Soo-min had wanted to be a doctor and asked Sin Mi-yeon how long he'd been a priest. She answered, "It was about 8 years ago when he joined seminary?" Ham Eun-ho had partial memory loss because of an accident she had 8 years ago. Ham Eun-ho started to suspect the relationship she had with Oh Soo-min.

At the end of the episode, guns went off while performing exorcism on Goo Do-kyoon and Oh Soo-min was shot. While Moon Gi-sun (Park Yong-woo) took over the exorcism, Ham Eun-ho removed the bullet from Oh Soo-min in the ambulance.

"[Spoiler] "Priest" Jung Yoo-mi Removes Bullet From Yeon Woo-jin"
by HanCinema is licensed under a Creative Commons Attribution-Share Alike 3.0 Unported License.
Based on a work from this source