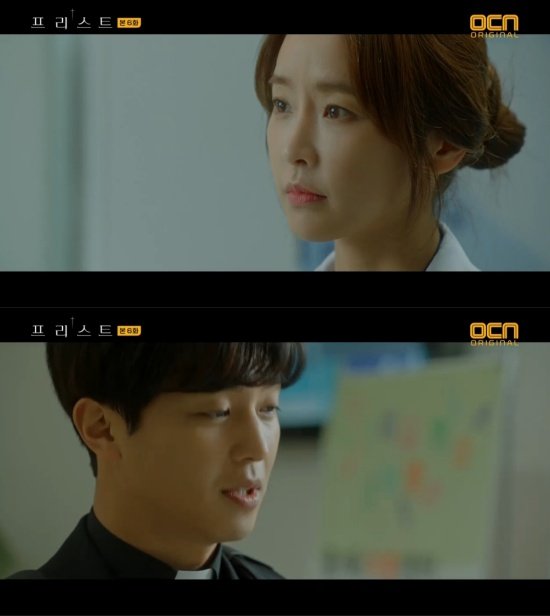 Moon Ki-seon (Park Yong-woo) and Oh Soo-min (Yeon Woo-jin) suggested she take a vacation, but she refused saying she couldn't take a break from the hospital. As a result, Oh Soo-min went to see Ham Eun-ho's direct senior and asked him to convince her to take a break.

However, the senior said, "It's funny that you should see it like that; the sentiment you're showing. Why are you overly worried about Ham Eun-ho? Attention, hostility, and jealousy come from an intimate relationship if I'm not mistaken". Oh Soo-min warned that he'd be punished if he made jokes about a priest.

Oh Soo-min went to Ham Eun-ho and said, "When I was fifteen, my mother was possessed by a spirit. What you saw may have been worse, but not any less than that. However, my father didn't admit it and becoming an exorcist is like a natural disaster; there's no knowing the cause of it. So let's just avoid it for a while".

Ham Eun-ho was convinced and said she'll take a vacation. Oh Soo-min was glad and smiled when she left the room. Then he spotted a map of Venezuela on her desk and walked over to see.

That night, Ham Eun-ho drank some wine with the Regia. Ham Eun-ho noticed Oh Soo-min counting numbers as he poured wine and followed. When he seemed surprised, she said someone taught her to do so.

He then asked her why she had a map of Venezuela on her desk and Ham Eun-ho said, "I'll be leaving here soon. I don't think I belong in this hospital. It has always been my dream to be in the NGO. It's been over ten years since I've decided to go there".

"[Spoiler] "Priest" Yeon Woo-jin Finds Traces of Venezuela on Jung Yoo-mi's Desk "
by HanCinema is licensed under a Creative Commons Attribution-Share Alike 3.0 Unported License.
Based on a work from this source