[Spoiler] "Punch - Drama" Kim Rae-won and Kim Ah-joong vs. Cho Jae-hyun and Choi Myung-gil, the start of a real war 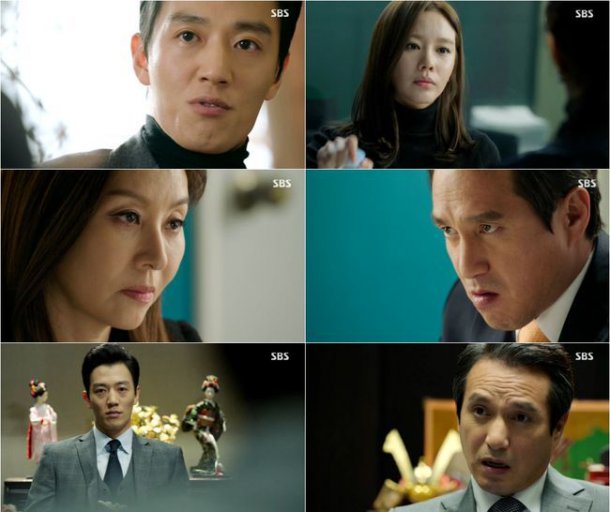 The real war has started.

Yoon Ji-sook was a variable. She found Kim Sang-min and offered him pardon which made him turn his back on Park Jeong-hwan. Yoon Ji-sook got statement from Kim Sang-min about Lee Tae-joon's irregularities and showed it to Lee Tae-joon. He gave her the interview footage of the broker in return. The two of them were on the same boat.

Park Jeong-hwan tried to find a new way. He tried to investigate the true owner of Ocean Capital but Lee Tae-joon had the upper hand. He revealed Park Jeong-hwan's health condition. Jo Kang-jae (Park Hyuk-kwon) stopped all investigators who could help Park Jeong-hwan. However, this didn't stop him. Park said to Lee Tae-joon, "Live a long and healthy life...in prison".

Park Jeong-hwan was ready to go head to head. Park Jeong-hwan and Choi Yeon-jin (Seo Ji-hye) found a university lecture footage in which Kim Sang-min claimed he was the owner of Ocean Capital. Park also decided he would reveal that he played a part in Lee Tae-joon's work of corruption. He left the aftermath of his daughter to Sin Ha-kyeong as he about to do something equivalent to suicide. Lee Tae-joon told Park Jeong-hwan that he would like to live the rest of his life in prison and Park seemed determined to do so.

"[Spoiler] "Punch - Drama" Kim Rae-won and Kim Ah-joong vs. Cho Jae-hyun and Choi Myung-gil, the start of a real war"
by HanCinema is licensed under a Creative Commons Attribution-Share Alike 3.0 Unported License.
Based on a work from this source