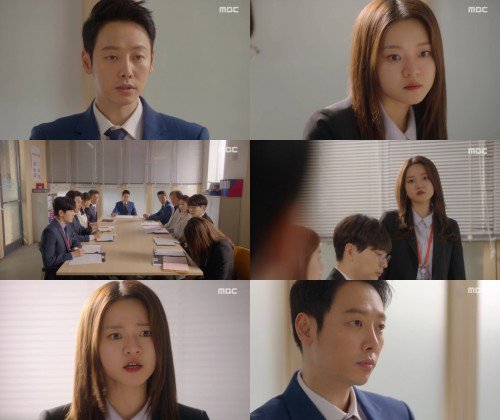 Go Ah-sung was furious with the way Kim Dong-wook used his authority.

Seo Hyeon claimed that he had no plans for hire in the latter half of the year and Eun Ho-won asked what was going to happen to the preferred conditions of the winners of the second half design contest.

Seo Hyeon said, "Internal circumstances of the company led to the decision so do I have to tell you everything? We never told you to join the contest".

Eun Ho-won started venting, "I think this is employment fraud. You don't have plans to hire us, but you advertised like you will, so desperate people came to sign up. We wasted our time here when there could have been better companies with better conditions".

"I think everyone else deserves to know that there's no hiring in the second half. You should at least erase the part that says 'preferred conditions'. You are just taking advantage of their desperation".

"[Spoiler] "Radiant Office" Go Ah-sung hits Kim Dong-wook with a blow "
by HanCinema is licensed under a Creative Commons Attribution-Share Alike 3.0 Unported License.
Based on a work from this source