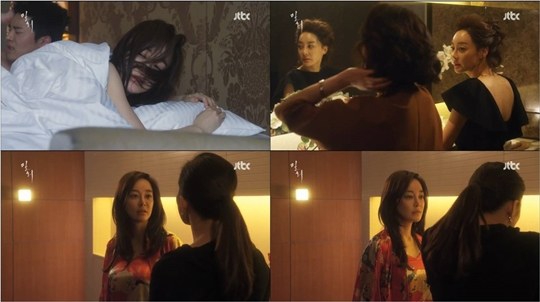 On the first episode of the JTBC drama "Secret Love Affair", Seo Han Arts Administration CEO Seo Yeong-woo (Kim Hye-eun) was sleeping on the same bed with a man in his 20's and was caught by her friend and assistant minister Oh Hye-won (Kim Hee-ae). She also put out a strong first appearance with step mother Han Seong-sook (Shim Hye-jin) in the bathroom as they fought.

Netizens say, "Kim Hye-eun's first appearance is quite strong", "The first episode has me so into it", "She's like a chameleon" and more.

One and One Stars said, "It looks like Kim Hye-eun has found the perfect role in which she can develop her acting skills even more".

Meanwhile, "Secret Love Affair" is about the fight between women hidden behind the money and authority of an arts administration.

"[Spoiler] "Secret Love Affair" Kim Hye-eun's appearance "
by HanCinema is licensed under a Creative Commons Attribution-Share Alike 3.0 Unported License.
Based on a work from this source