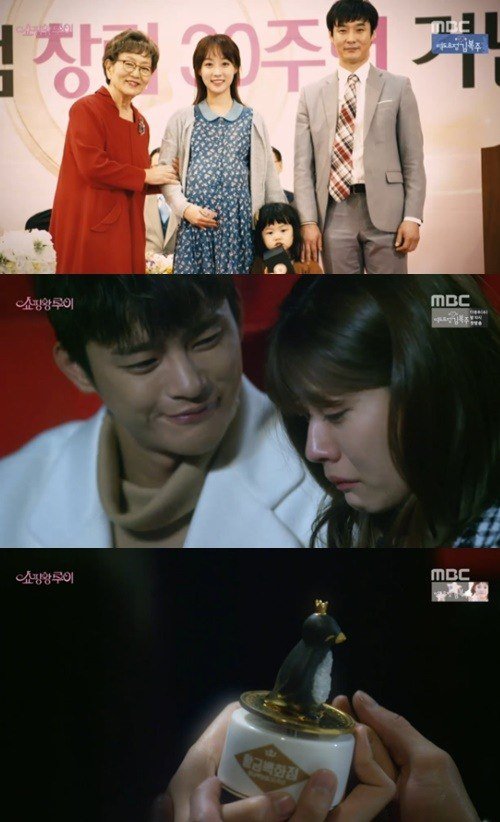 "Shopping King Louis" is over. Seo In-guk and Nam Ji-hyun had met when they were young and the drama ended with a kiss.

On the final episode of the MBC drama "Shopping King Louis", it turned out that Louis (Seo In-guk) and Ko Bok-sil (Nam Ji-hyun) had once met when they were young. Bok-sil cried and they hugged each other.

Cha Joong-won became the president of Hwang Geum Group instead of Louis. He was alone in his office when he suddenly missed working with the others where Louis was.

Cha Joong-won stopped liking Bok-sil but he was still her Daddy Long Legs. He said it was a good thing she was Louis's partner and suggested she continued studying.

Kim Ho-joon proposed to Heo Jeong-ran who was pregnant. He gave her a ring and she cried. The two got married in the company housing.

Louis took Bok-sil to a movie theater. He showed her a video he had prepared for her which was of her family winning a prize at the 30th anniversary event of Hwang Geum Department Store. Bok-sil cried at the sight of her parents and Louis hugged her. Apparently, Louis saw her for the first time on the day and he'd always thought about the girl named 'Ko'.

The two returned to the rooftop house. Louis said, "Only you believed me when no one else would. Was I that trustworthy?" Bok-sil replied, "No one had said, 'trust me' when I was growing up. I felt solid". Then Louis said, "I will say that to you forever. Trust me". The episode ended with them kissing.

"[Spoiler] "Shopping King Louis" ends happily, Seo In-guk and Nam Ji-hyun met when they were young"
by HanCinema is licensed under a Creative Commons Attribution-Share Alike 3.0 Unported License.
Based on a work from this source