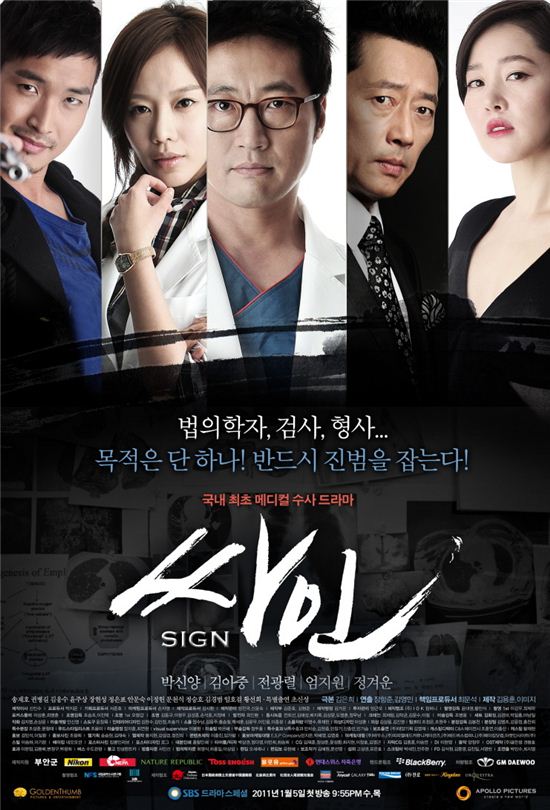 "Sign" is drawing audience with its unexpected development. An addictive storyline with twist after twist is also a big part of it.

This episode drew with great speed the mysterious series of murders in the Han Young Group 20 years ago and its relation to the death of Yoon Ji-hoon (Park Shin-yang) teacher and former director of the National Institute of Science Investigation, Jeong Byeong-do (Song Jae-ho).

Yoon Ji-hoon concludes the mystery deaths as nerve poisoning and witnesses another victim dying in front of his eyes when he goes looking for chairman Jeong.

Yoon Ji-hoon finds out the type of poison is a type of heavy metal antimony, and confirms it was an antimony poison death by digging up a body of a victim who died 20 years ago.

Prosecutor Jeong Woo-jin finds chairman Jeong in his office and arrests him for charges of murder but the prosecution goes over to the citizen committee. Just as Yoon Ji-hoon is about to go to the committee he receives a letter written by Jeong Byeong-do before he died. He admitted and sought forgiveness for manipulating the autopsy results 20 years ago. Yoon Ji-hoon brings the letter close to his heart and cries tears of sorrow at the words, "I love you endlessly".

Yoon Ji-hoon attends as a witness in the citizen committee and testifies unexpectedly, "The result of Han Tae-joo's autopsy was antimony but it wasn't fatal". He then adds shockingly, "His death wasn't poisoning but an acute endogenous death. His type of death was natural".

Viewers say, "This is a hair-rising twist. I'm curious about the future story", "I look forward to what Yoon Ji-hoon's shocking statement will bring".

Meanwhile, MBC "My Princess" and KBS2 "President" on the same time schedule recorded 14.8% and 7.5% respectively.

"[Spoiler] "Sign" twist after twist... best rating 20.6% 'remarkable'"
by HanCinema is licensed under a Creative Commons Attribution-Share Alike 3.0 Unported License.
Based on a work from this source