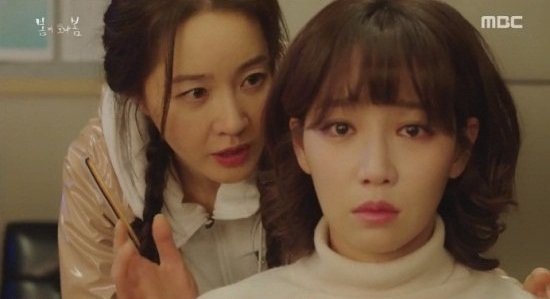 The new MBC drama "Spring Turns to Spring" tells the story of Kim Bo-mi (Lee Yu-ri), a news anchor who thinks news doesn't matter if it doesn't produce high viewing percentage, and Lee Bom (Uhm Ji-won) who used to be a star, but married a member of parliament and devoted herself to taking care of her family.

Lee Bo-mi was a skilled reporter who landed an anchor position. She was outstanding in appearance and her work. She was passionate and didn't care what other people thought about her. However, having similar names with Lee Bom who was kind and transparent, brought on a misunderstanding. There was a TV quiz show that donates scholarships onwhich she was asked to be on and there were two bags, a real and a fake.

Lee Bo-mi and Lee Bom happened to be in a marathon and their bodies switched. They felt their bodies itch in the bathroom and realized their bodies had changed. They checked themselves out in the mirror and panicked.

Kim Bom headed for the news desk to take over Kim Bo-mi's position as anchor. Frightened, Kim Bo-mi had let her sit there after a long talk.

The performances of Lee Yu-ri and Uhm Ji-won were impressive. They have to be alike as they are playing each others' roles but there was no telling them apart. Anticipation rises for the next episode.

"[Spoiler] "Spring Turns to Spring" Lee Yu-ri and Uhm Ji-won Switch Bodies"
by HanCinema is licensed under a Creative Commons Attribution-Share Alike 3.0 Unported License.
Based on a work from this source