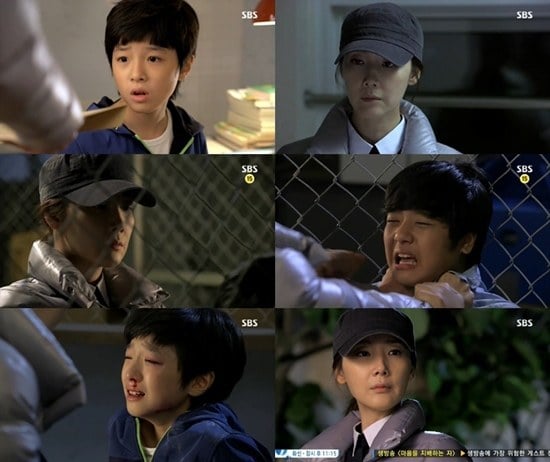 Choi Ji-woo attempted to steal and murder in favor of Nam Da-reum who was being bullied.

On the fourth episode of the SBS drama "Suspicious Housekeeper", Eun Se-kyeol (Nam Da-reum) was suffering from school bullying and asked Park Bok-nyeo (Choi Ji-woo) to murder someone.

Eun Se-kyeol's target school was an international one but he couldn't adjust to the school surroundings and due to his long time overseas. His classmates used his bus card to buy snacks and asked him to show them his answer sheet.

With all the stress, Eun Se-kyeol started having nightmares and asked Park Bok-nyeo how he could achieve the perfect score on a test. She told him he just needed to know the questions and he asked her to get the test papers from school. She did do and he told her about the bully at his school and asked her to murder him.

Park Bok-nyeo moved as her employer told her to and strangled the bully. Eun Se-kyeol showed up in time to stop her and the three of them faced each other. However, Eun Se-kyeol was beaten by the bully and Park Bok-nyeo just comforted him and helped him to solve the problems in his way.

Meanwhile, Eun Han-kyeol (Kim So-hyun) drove their father away from the house as he had hurt his family so much and lived in the house with just Park Bok-nyeo.

"[Spoiler] "Suspicious Housekeeper" from stealing to murder"
by HanCinema is licensed under a Creative Commons Attribution-Share Alike 3.0 Unported License.
Based on a work from this source