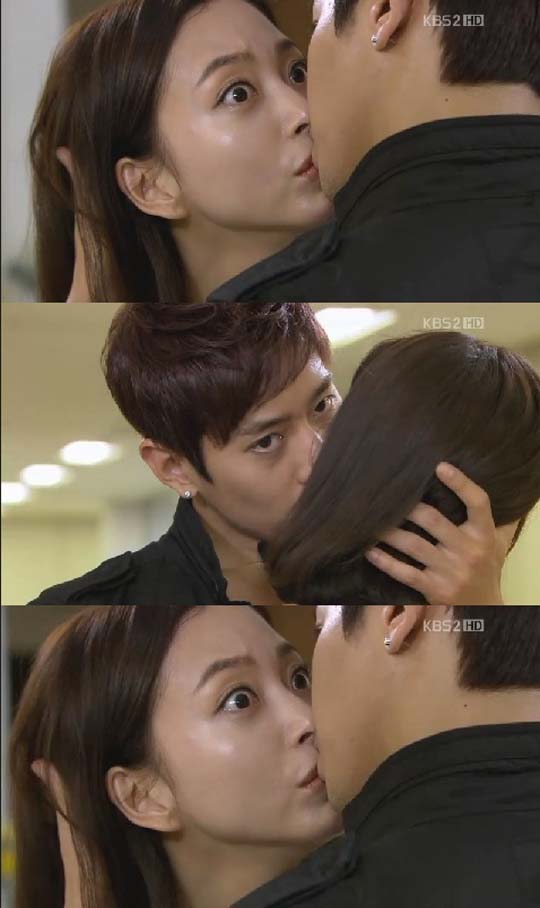 Myeong-wol (Han Ye-seul) is conveyed another mission from the North to win over Kang Woo (Eric Mun) in 3 months and get married to him, then voluntarily return to the North. Tough Northern soldier Myeong-wol gets trained to be feminine and made up to seduce Kang Woo.

Kang Woo gets proposed to by fellow actress and daughter of the group that has his back, Joo In-ah (Jang Hee-jin).

Myeong-wol then abruptly goes to see Kang Woo to tell him that she loves him and becomes pitiful.

Kang Woo drives her to the corner and asks if she's mad. Joo In-ah happens to pass by that situation. Kang Woo asks Myeong-wol "How far are you willing to go with me?" and kisses her.

"[Spoiler] [TD On Air] "Spy MyeongWol" Eric, kisses Han Ye-seul 'the romance starts'"
by HanCinema is licensed under a Creative Commons Attribution-Share Alike 3.0 Unported License.
Based on a work from this source