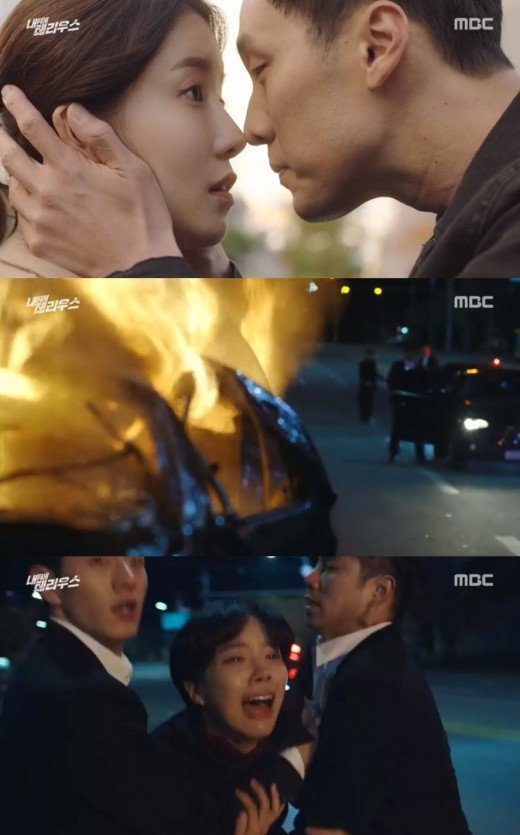 On the latest episode of the MBC drama "Terius Behind Me", Kim Bon (So Ji-sub) was in danger of death.

Go Ae-rin (Jung In-sun) found out there was going to be a biological terror attack in the school the twins went to and stopped it. The terrorist was the Minister of Health and Welfare who was supposed to give a speech at the school.

Ae-rin and Kim Bon became closer to each other after putting a stop to the attack. Bon rubbed his nose on hers and showed her affection. They also worried about each other on the phone.

However, danger approached. Kwon Young-sil (Seo Yi-sook) knew Ae-rin hid Kim Bon and arrested her. She was bait to catch him. Knowing this, Kim Bon got himself caught and saved Ae-rin. As they passed each other, Ae-rin cried.

It was Kim Bon's birthday. Yoo Ji-yeon (Im Se-mi) comforted Ae-rin by saying, "He'll be back. Prepare his birthday dinner and presents".

Ji-yeon and Im Woo-cheol (Uhm Hyo-sup) planned to bomb the evacuation truck and save Kim Bon who had to get out in 10 seconds after the explosion. However, the car stopped faster than planned and the car exploded. Ji-yeon cried out thinking Bon was dead. At the same time, in a different place, Ae-rin also sensed something was wrong.

"[Spoiler] "Terius Behind Me" So Ji-sub and Jung In-sun Rub Noses"
by HanCinema is licensed under a Creative Commons Attribution-Share Alike 3.0 Unported License.
Based on a work from this source