[Spoiler] "The Crowned Clown" Will the Clown Become King? 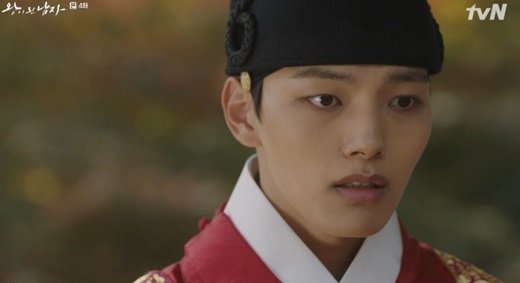 On the latest episode of the tvN drama "The Crowned Clown", Ha Seon (Yeo Jin-goo) started solving cases in the palace on his own.

Ha Seon struggled to protect his Queen (Lee Se-young). The Queen became entrenched in a conspiracy that she tried to poison Seon Hwa-dang (Seo Yoon-ah) because of Sin Chi-soo (Kwon Hae-hyo) and Kim Sang-goong (Min Ji-ah).

Ha Seon realized the Queen Mother was behind this and suggested a deal in order to save the Queen.

Lee Gyoo (Kim Sang-kyung) was hostile towards Ha Seon, but Ha Seon said, "Sometimes you have to risk tens and thousands for just one. What use is power when you can't think like a human?"

Ha Seon felt pity for Lee Heon (Yeo Jin-goo) who was hallucinating and slowly breaking down. On the other hand, he was surprised at himself for being a good king.

Lee Gyoo made created a scar on Ha Seon to mirror Lee Heon's and said, "The clown is dead. You're the king now". He was determined to have Ha Seon as his king from now on.

Ha Seon's feelings for the Queen keep growing and so do the number of people he wants to protect in the palace. He's also getting used to the palace and is carrying out his duties as king much better than the real king.

"[Spoiler] "The Crowned Clown" Will the Clown Become King?"
by HanCinema is licensed under a Creative Commons Attribution-Share Alike 3.0 Unported License.
Based on a work from this source