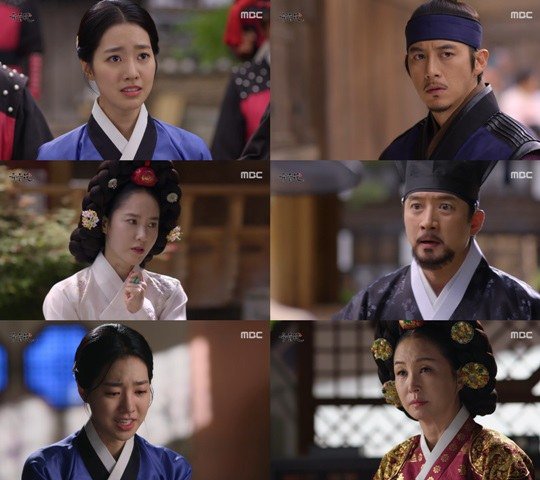 Ok-nyeo (Jin Se-yeon) struggled to clear her name of killing Park Tae-soo (Jun Kwang-ryul) on the tenth episode of the MBC weekend drama "The Flower in Prison".

Ok-nyeo broke through the siege and went to meet Kang Seon-ho (Lim Ho). She pointed a knife at his neck and asked, "I did as the country asked me to and this happened. What is going on?"

However, Kang Seon-ho told her there was intervention with the authorities and it was all under Yoon Won-hyeong's (Jung Joon-ho) orders. Kang Seon-ho begged, "It's all my fault. Just kill me" and Ok-nyeo became weak hearted. She left without hurting him.

Ok-nyeo avoided the radar with Yoon Tae-won's (Go Soo) help. She then decided to come clean with the truth but Yoon Tae-won stopped her with the fact that she could be used as a political prey.

At the same time, Jeong Nan-jeong (Park Joo-mi) and Queen Moon-jeong (Kim Mi-sook) who was suspicious about Yoon Tae-won, ordered for Ok-nyeo to be arrested. Ok-nyeo was soon brought in front of Queen Moon-jeong.

"[Spoiler] "The Flower in Prison" Jin Se-yeon faces Kim Mi-sook"
by HanCinema is licensed under a Creative Commons Attribution-Share Alike 3.0 Unported License.
Based on a work from this source