[Spoiler] "The Guest - Drama" Kim Jae-wook Struggles With the Truth

Detective Ko followed Kang Gil-yeong and beat her up, then he threw her off the building. She was hanging from the building by a single rope. When he talked about her mother she yelled for the spirit to come out of the detective. Yoon Hwa-pyeong (Kim Dong-wook) and Choi Yoon (Kim Jae-wook) arrived and Detective Ko said, "It's the Peeping Tom and the bloody priest". He said to them, "It's too late. This is all because of you. Everyone is going to die because of you".

Choi Yoon suppressed his suspicions about Yoon Hwa-pyeong and executed the exorcism. When Choi Yoon left to get holy water, the detective said, "He says this is enough" and tried to twist his own neck. Kang Gil-yeong shouted for him to go home and luckily the exorcism worked and the detective came back to himself.

Choi Yoon told Kang Gil-yeong, "Don't go after Park Il-do. I'll do it on my own. We've lost too many people so no more". However, Kang Gil-yeong said, "You can't do it alone, you know that. I lived because of you so we have to do it together".

Choi Yoon went to see Father Yang, but he wasn't there. Choi Yoon searched through his things and didn't find anything so he was about to leave, but he happened to open the Bible. All the pages were colored black.

Choi Yoon told Yook Gwang that Park Il-do was still in the house and headed somewhere. He found something on the ground and was shocked. Just then, his body flew up into the air and an unknown power strangled him. Yook Gwang managed to get away and he was about to tell Yoon Hwa-pyeong who Park Il-do was, but the car moved by itself. Yook Gwang yelled, "Not Hwa-pyeong!" and lost consciousness. In front of him was Father Yang. 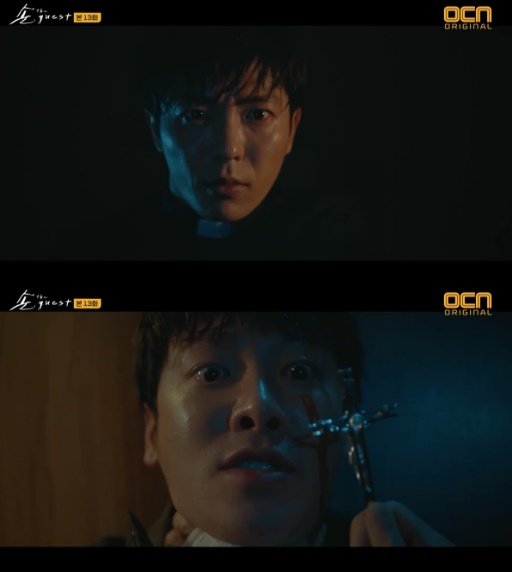 "[Spoiler] "The Guest - Drama" Kim Jae-wook Struggles With the Truth"
by HanCinema is licensed under a Creative Commons Attribution-Share Alike 3.0 Unported License.
Based on a work from this source