[Spoiler] "The Horse Healer" thanks to the horses 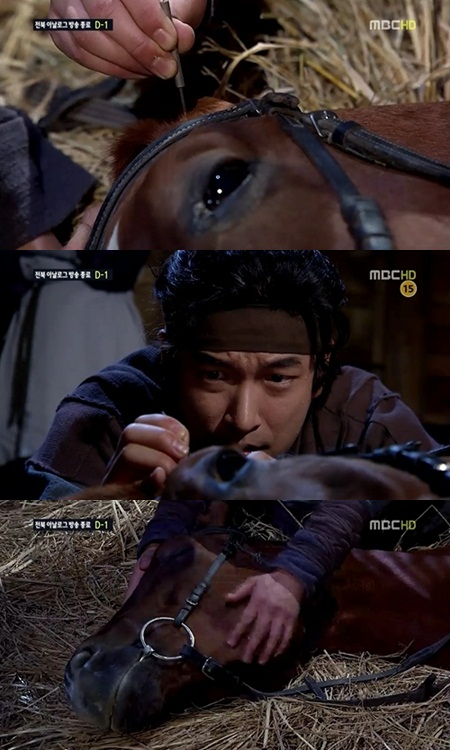 The viewers are saying great things about the horses in "The Horse Healer".

On the seventh episode of the MBC drama "The Horse Healer" Baek Gwang-hyeon (Cho Seung-woo) treated the horse that was to be given to Emperor Cheong.

As the horse didn't eat the only root that would cure its lung disease, Baek Gwang-hyeon attempted to put it to sleep using acupuncture. This lung disease was something that would only go away after excruciating pain so he was going to put it to sleep until the pain passed. The veins he was going to acupuncture were so dangerous and difficult no other healer had tried before.

Baek risked his life and his teacher's but the horse seemed to be in pain and then fell asleep. He had succeeded in the difficult acupuncture. However, the horse that came to a few days later died from anesthetic drugs given by other healers that envied him.

No one believed that the horse was drugged and pointed out that his acupuncture was wrong. Lee Myeong-han (Son Chang-min) was the only one who believed him and saved the horse. In this process, the horse's pain was so real and well expressed.

Netizen's say, "Son Chang-min and Cho Seung-woo were amazing but the horse has some talent to and that's what keeps me watching", "The horse acts better than any other idol actor or actress" and more.

"[Spoiler] "The Horse Healer" thanks to the horses"
by HanCinema is licensed under a Creative Commons Attribution-Share Alike 3.0 Unported License.
Based on a work from this source