Lee Min-ho and Jun Ji-hyun kissed each other.

On the ninth episode of the SBS drama "The Legend of the Blue Sea", Heo Joon-jae (Lee Min-ho) leaned on Sim Cheong (Jun Ji-hyun).

Heo Joon-jae told Sim Cheong he 'had plans to like her' and told her to go home. However, he collapsed on the spot and he met Dam Ryeong in his dream. Dam Ryeong said, "The relationship here has extended to there. So is a bad relationship. Protect her from danger".

Heo Chi-hyeon (Lee Ji-hoon-I) called Joon-jae and told him the hospital where Nam was. Then Joon-jae's father Heo Il-joong (Choi Jung-woo) appeared and Joon-jae said, "I won't receive any heritage from you". He didn't mean it and he said, "But I want you to be healthy". 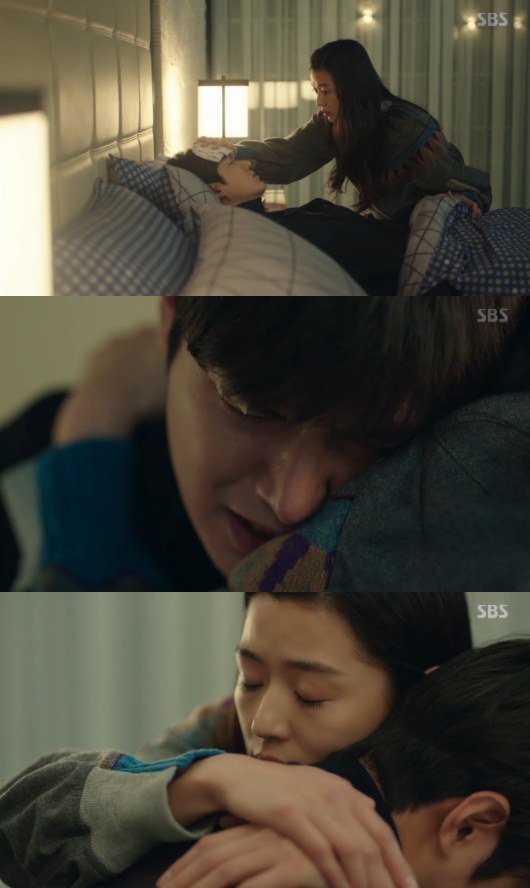 To Sim Cheong, Joon-jae complained and grumbled, "You should leave. When I said don't give up, it was all a lie". However, Sim Cheong said, "No, I won't give up no matter what you say so don't be angry that you couldn't say what you want and just say it".

Heo Joon-jae told her about his father and how he missed him. He cried and she comforted him. She said, "Tell me anything from now on. Things you can't tell the others. I can listen and forget". Heo Joon-jae asked, "Can you really forget? Then really forget this". He kissed her.

Heo Joon-jae and Jo Nam-doo (Lee Hee-joon) started working on Ahn Jin-joo (Moon So-ri) and she got the bait. Cha Si-ah (Shin Hye-sun) showed Joon-jae where Dam Ryeong's holding was and at that moment, Dam Ryeong thought to himself, "What can I do to make him believe me?"

"[Spoiler] "The Legend of the Blue Sea" Lee Min-ho kisses Jun Ji-hyun"
by HanCinema is licensed under a Creative Commons Attribution-Share Alike 3.0 Unported License.
Based on a work from this source