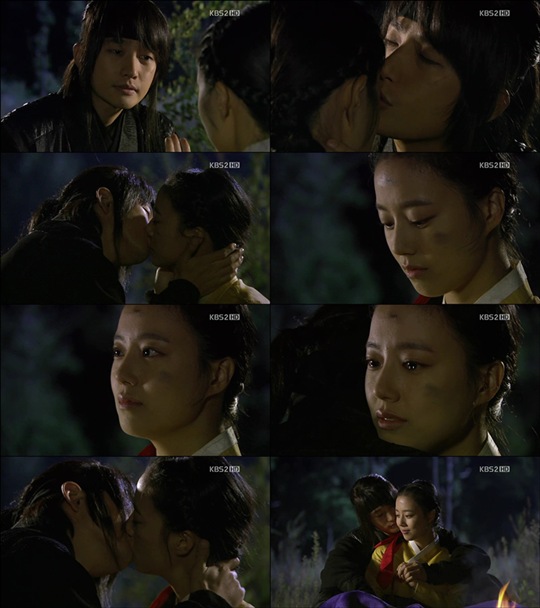 On the 21st episode of KBS drama "The Princess' Man" Kim Seung-yoo (Park Si-hoo) rescues Se-ryeong (Moon Chae-won) who's become a slave and leaves to where Jeong-jong (Lee Min-woo) and Princess Kyeong-hye (Hong Soo-hyun) are.

Seung-yoo disguised himself to enter Sin-myeon's (Song Jong-ho) home where Se-ryeong was held slave in. He got on a horse with her and rode away.

He then suddenly stopped the horse and said, "You can tell me if you're hurting or if you're tired". Se-ryeong then said, "My back hurts and I'm tired of riding the horse". He helped her get off the horse.

They lit a fire and looked at each other with affection. Seung-yoo looked at Se-ryeong whose face was ashened from lighting the fire as if he felt sorry for her, then kissed her on the forehead, eyes then lips.

To Se-ryeong, who risked so much because of him, he said, "If you come with me, it's never ending suffering". Se-ryeong put her hands to his face and said, "I don't care if it's the way to hell" and revealed her love for him.

Seung-yoo hugged her close. They held hands and looked at each other with tear-filled eyes. They kissed again and related the affection they felt for each other.

"[Spoiler] "The Princess' Man" Moon Chae-won and Park Si-hoo recheck love with a kiss"
by HanCinema is licensed under a Creative Commons Attribution-Share Alike 3.0 Unported License.
Based on a work from this source