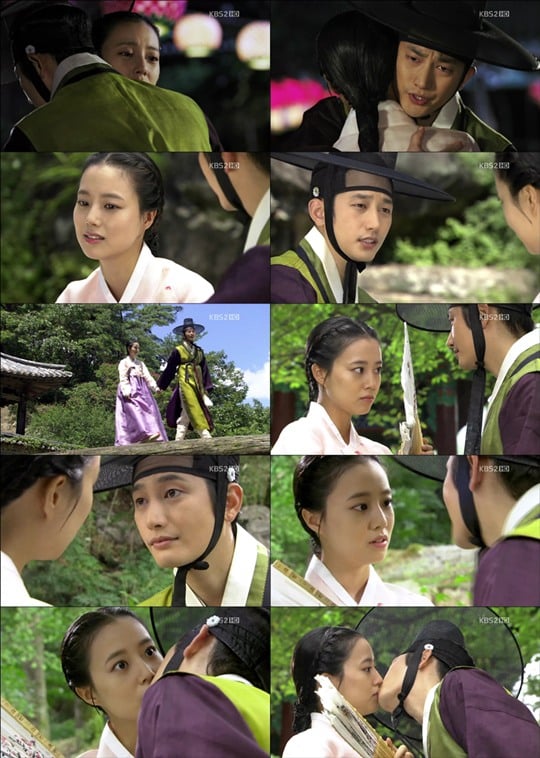 On the 7th episode of KBS 2 drama "The Princess' Man" on the 10th, Kim Seung-yoo (Park Si-hoo) and Se-ryeong (Moon Chae-won) had a romantic date.

Seung-yoo was at risk of losing his life because of Se-ryeong but he couldn't forget her so he found her and told her is true feelings. At his confession, she couldn't help but cry and reveal her feelings too.

However, Se-ryeong still kept her identity hidden and posed as a servant. She couldn't tell him she was the daughter of General Soo Yang. They continued their sweet date.

Seung-yoo held her hand and took a walk, touching her face and truthfully telling her his feelings. Se-ryeong was shy but couldn't hide her feelings.

Ending the risky date, the two parted, promising to meet again. Not wanting to say goodbye, Seung-yoo looked at Se-ryeong who had her face covered behind a fan and suddenly kissed her. Se-ryeong couldn't forget it and fluttered.

Meanwhile, Se-ryeong was shocked as she found out that her father was planning on slaughtering Kim Jong-seo (Lee Soon-jae) and Kim Seung-yoo at the later half of the drama.

"[Spoiler] "The Princess' Man" Park Si-hoo and Moon Chae-won fan kiss"
by HanCinema is licensed under a Creative Commons Attribution-Share Alike 3.0 Unported License.
Based on a work from this source