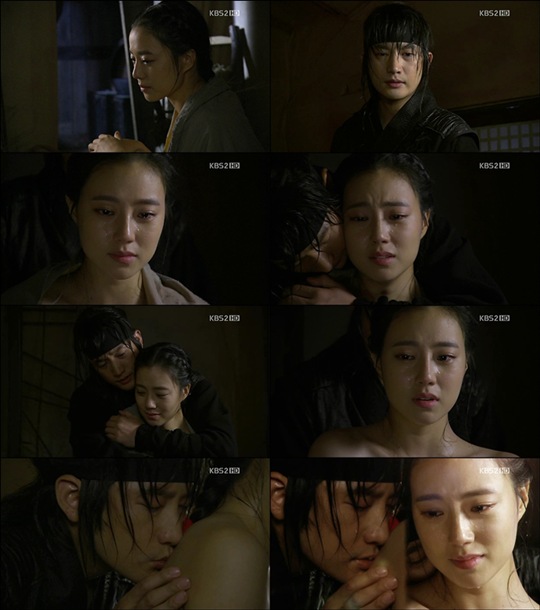 On the twenty-second episode of the KBS 2 drama "The Princess' Man", Kim Seung-yoo (Park Si-hoo) predicted goodbye with Se-ryeong (Moon Chae-won) as he was about to leave to plan another revolt.

Se-ryeong decided she couldn't follow him to plan the revolt against the man who was her father.

Deciding to stay apart from Seung-yoo for a while, she asked him to go horseback riding. He thought it was weird but he did as she asked. While they were out, it rained and they escaped it to a worn down cottage.

She told him that she wouldn't go with him. She told him, "I don't want to be a burden on you. I won't do. I will wait until you return. Don't forget me".

Seung-yoo told her back, "I will come for you" he promised her, hugging her from the back and Se-ryeong cried.

Seung-yoo then noticed the scar on her back. This was made because she took an arrow for him. He kissed it and showed his affection for her, looking at it full of sorrow.

Meanwhile, Jeong-jong (Lee Min-woo-I) was executed as his plans for the revolt were detected. General Soo-yang (Kim Young-chul) gave poison to Danjong and General Geum-seong and made Princess Kyeong-hye a maid servant.

"[Spoiler] "The Princess' Man" Park Si-hoo and Moon Chae-won kiss on the scar"
by HanCinema is licensed under a Creative Commons Attribution-Share Alike 3.0 Unported License.
Based on a work from this source